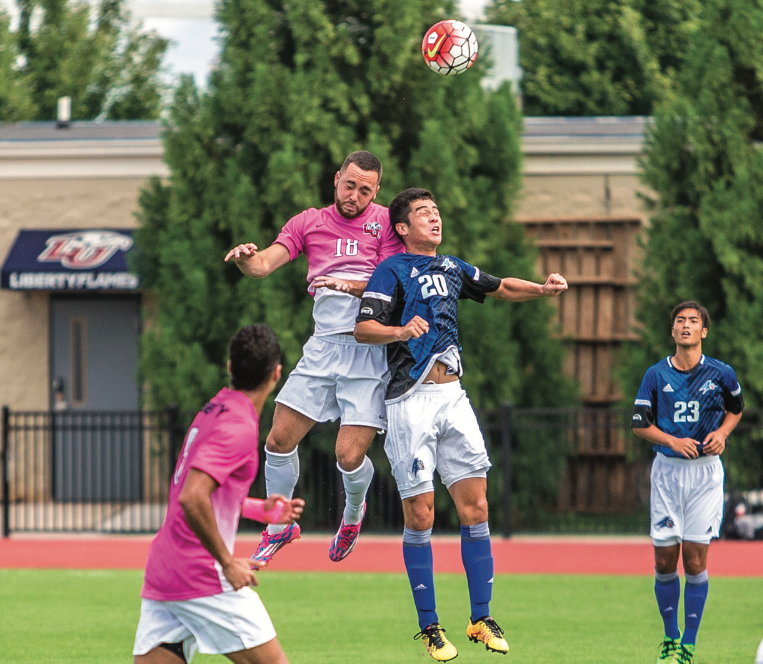 The Liberty Flames men’s soccer team (4-5-1) lost its first conference game of the year Saturday afternoon at Osborne Stadium 4-3 against the Bulldogs of UNC Asheville (3-8).

The Flames tied the game at 3-3 with a goal by freshman Rigoberto Rojas in the 87th minute.

The Bulldogs responded with the game-winning goal headed in by junior midfielder Andrew Lawrence off an assist from senior forward Zach Joens with 30 seconds remaining in the game.

HEADER — Brady Mazzei showed off his hops going for the ball against Trenton Klatte of the Bulldogs. Photo credit: Caroline Sellers

The Flames were the aggressor in the first half, outshooting the Bulldogs 11-1.

The Flames entered halftime with a 1-0 lead thanks to a goal by senior forward Martin Agredo in the 23rd minute.

In the second half, the Bulldogs were much more aggressive with 13 shots and three corner kicks as compared to only one shot and no corner kicks in the first.

The Bulldogs first tied the game in the 61st minute with a goal by Joens.

Liberty responded with a goal in the 63rd minute by sophomore forward Tresor Mbuyu, regaining the lead 2-1.

The Bulldogs answered with a tying goal of their own in the 69th minute by Ben Chapal.

The Flames and Bulldogs played the game evenly until the Bulldogs took the lead once again at 3-2 on a second goal from Joens in the 81st minute.

The Flames tied the game in the 87th minute, only to give up the winning goal.

The loss moves Liberty to 1-1 in conference play, while UNC Asheville moves to 2-0.

Liberty Head Coach Jeff Alder was upset with the way his team lost the game.

Alder noted the increased aggressiveness of the Bulldogs in the second half.

“They committed more numbers in the second half, and we adjusted to that,” Alder said. “We just
didn’t execute.”

Alder remains confident in the team as it moves deeper into conference play.

“We can play with anybody in the conference, but we have to be able to play better defensively,” Alder said.

Alder said the loss will be a trial the Flames will have to push through in order to get better as a team.

“We’ll see what we’re made of now,” Alder said. “This will test our resolve and our togetherness. We’ll have to be more hungry next game.”

Pink towels were given out to fans and pink balloons were released at halftime by representatives from different organizations involved with raising awareness and funding better treatment for breast cancer.

Alder and his family have been affected by breast cancer, as it has been a year since his wife Lori has been cancer-free after having been diagnosed with breast cancer.

“Breast cancer (awareness) is a great cause and raising awareness is very important,” Alder said. “It was a bittersweet day. We wish we could have won the game, but at the same time I’m very blessed to have my wife here to let go of a balloon at halftime of the game.”

The Flames continue conference play as they travel to Radford to take on the Highlanders Wednesday, Oct. 5 at 7 p.m.