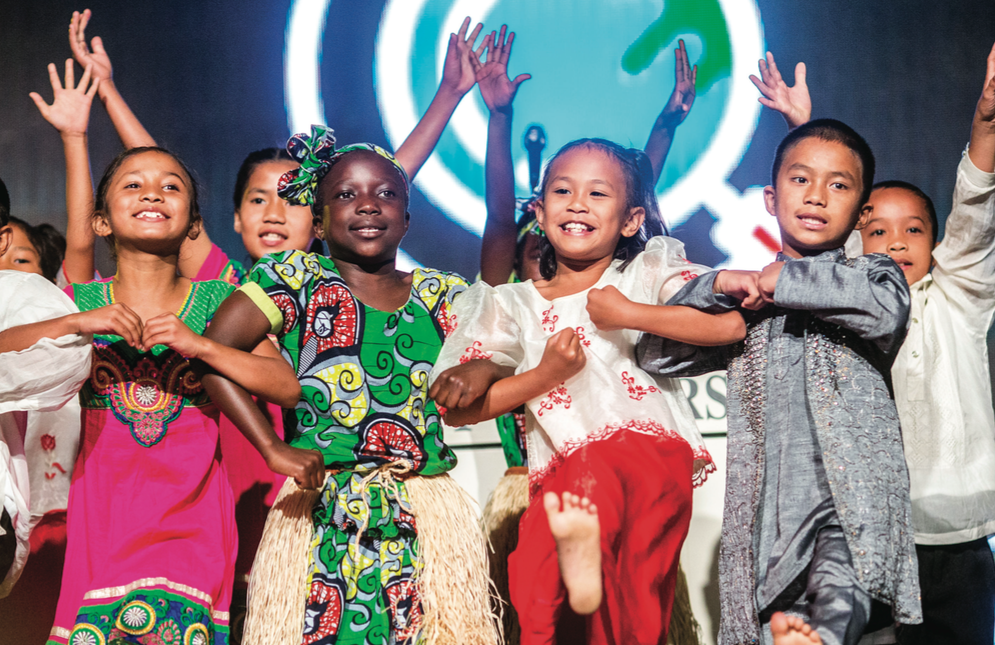 The Children of the World Choir made an appearance at Liberty University Convocation Sept. 14 with their dancing, singing and brightly-colored, native dress as they signaled the start of Global Focus Week.

According to the LU Serve webpage, Global Focus Week seeks to help students, faculty and staff become more globally aware through a variety of opportunities.

LU Serve International Director Steven Gillum said students should be equipped to serve and interact with various cultures from around the world, as access to them has become almost immediate.

“My personal heartbeat is that the LU students and staff capture the vision of being global ambassadors in every sphere of society,” Gillum said.

To encourage students toward this global vision, Global Focus Week engaged students’ five senses to help them feel as if the world had come to them.

Sight was appealed to as students explored the Culture Shape art exhibit, which was comprised of paintings and photographs that depicted people from around the globe.

To Mariannette Oyola, a Master of Fine Arts student, images contain power because they cannot be unseen and will have a psychological and emotional impact, which can be used for good.

Oyola live painted a picture of a young boy and had two other paintings in the exhibit, all of which drew inspiration from pictures her friends had taken on their mission trips.

“They are people out there that need help one way or another. They’re less privileged, but they’re still able to smile and still represent God’s workmanship.”

Students also had the chance to see “The Insanity of God,” a movie inspired by the book bearing the same title by Nik Ripken.

This event, hosted in an overflowing lecture hall in DeMoss Hall, chronicled the life of Ripken as he served as a missionary and interviewed members of the persecuted church in countries closed to Christianity.

Closing with a time of prayer, Liberty professor Dr. Chris Gnanakan prompted the audience to pray for persecuted Christians and the missionaries serving them.

Sound was employed as well at the ethnomusicology concert, in which students from countries such as Nicaragua, Indonesia and Albania told stories from their countries.

Accompanying this, the students sang songs in Arabic, Spanish and other languages with a variety
of instruments.

This was all done to combine music and global engagement so that cultures could express their unique identities through the arts, according to a brochure on the Master of Arts in Ethnomusicology.

Throughout Global Focus Week there were also opportunities to hear from professionals about how they do missions within their field.

The lectures ranged from Convocation with Vernon Brewer, founder of World Help, to events hosted by the school of business and the school of engineering, focusing on how to fuse their future occupation and missions together.

Lem Curran, keynote speaker for the Engineers on Mission event, said students should focus less on the questions in their life and instead begin to say, “Yes, Lord.” Curran did emphasize one question though.

“You can have good theology, but does it help you love somebody?” Curran said. “It’s not all about knowledge.”

Beyond sight and sound, students could taste and smell foods from exotic cultures prepared by students of those countries.

A Middle Eastern open house included pita and humus from Jordan, salad from Lebanon and lentil soup from Iran.

Along with this, Culture Break events in the library allowed students to savor fresh crepes and on another day drink coffee from Rwanda, Costa Rica, Ethiopia and Guatemala.

The final sense engaged at Global Focus Week was touch, which was first incorporated at the showing of “The Insanity of God,” as everyone was given rubber bracelets molded as barbed wire to show unity with the persecuted Church.

Oyola lived in Puerto Rico until she was 12 years old, which she said helped her grasp the importance of understanding and impacting other cultures through her skills.

“We need to reach out as Christ would,” Oyola said.

Any student curious about the lentil soup could have found out it was made by Nastaran Morgan, who works for LU Serve International and whose family escaped Iran during a revolution when she was 10 years old.

The recipe Morgan used was passed down from her mother, who helped preserve their family’s Iranian heritage even after coming to America.

“She’s in heaven now, and I miss her more than I can tell you, but in many ways she was my Iran,” Morgan said.

“Even though we left home she still had all of our recipes and traditions and connections.”

Thomas uses his coffee shop for missions, both through conversations with customers coming into his local shop or developing connections with coffee farmers in Nicaragua.

In addition to the events throughout campus, students could meet and make connections with missionaries and representatives from dozens of organizations.

Morgan said being in communication with people like this is important so that one does not become content within their own bubble.

“God could’ve had me be born here, but he chose me to be Iranian,” Morgan said.

“Then he chose me to be expelled into this country so that I could help other Americans know that Iranians too are loved by God and have loved God. We are all truly made in his image, and we are all truly sinners in need of him. The differences aren’t fundamental, they’re usually very surface ones.”

Students seeking to continue expanding their global awareness can go to www.liberty.edu/admissions/international/ to learn about future open houses or to the LU Serve International webpage to sign up for service training.

Price is a news reporter.