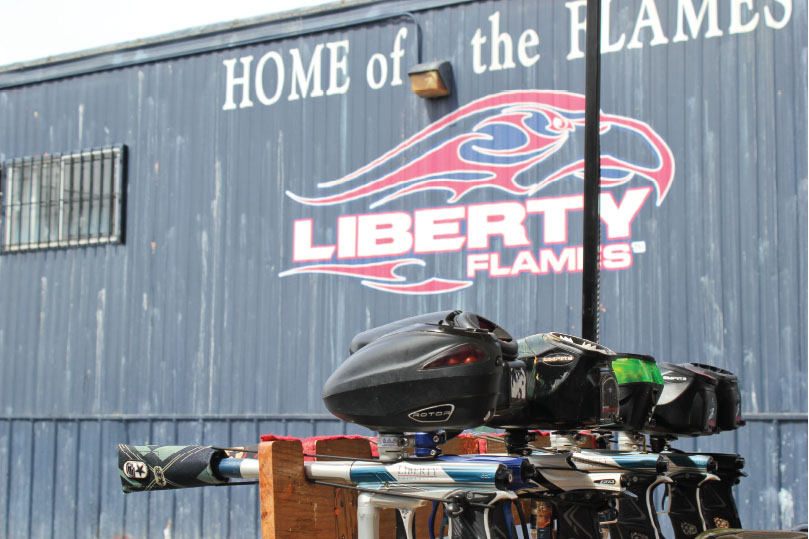 Splat! The plastic of a paintball breaks, splattering paint on the uniform of a Liberty University Paintball Team member.

The paintball team shoots between 36,000 and 48,000 paintballs per practice, launched at a rate of 10.5 balls per second — each ball traveling at about 280 feet per second toward its target.

The paintball team’s practice was finally tested in the Class A division of the National Collegiate Paintball Association (NCPA) Championships, hosted April 15-17 in Kissimmee, Florida.

The team placed third, marking the first time the team has made it to the semifinals  since 2012.

“We had a good turnout,” Head Coach Brian Davidson said. “Our standings were really good, as well as our team comradery and what we stand for.

We did very well in representing Christ when we were there, on and off the field.”

Although attaining the bronze was a noteworthy achievement for the team, it was not the only victory of the season.

“We had a Class A event in November, which was like a conference match, where we went 2–1,” Davidson said.

“Then in the spring we had a two-day event where we went 4–2. So our season record was 6–3, which was the highest in our conference (consisting of Kennesaw, NC State and ECU), so that helped going into Nationals, because we had a high seed.”

The team has had great success over the years, despite the constant team changes due to graduation.

“One of the best things about Liberty is that most of our guys, we trained from the ground up,” senior Brian Natzke said, who plays the Back position for the team.

“We don’t bring in pros or division one players. (The team) is (made up of) guys that we trained and basically taught how to play paintball.”

Davidson prefers guys on the team who have very little training, because he doesn’t have to “fix any bad habits” and can train his athletes the right way.

“A lot of other schools that do well, usually only do well for one year and then they’re nobody,” Davidson said.

“But Liberty is always up there contending for the title. We have such a good program, and we’ve always been competitive.Since we have such an awesome facility and program, we’re able to get these people that have never really played tournament level paintball and train them up to the tournament level.”

According to Davidson, the sport of paintball is a growing sport. Having been negatively impacted by the economic downfall after 2008, it is now on the incline and gaining traction as people now have money to invest in the sport.

With this new growth, the paintball team has opened its facilities to both Liberty students and Lynchburg locals.

“We do rental groups for anyone around the community, like birthday parties,” Davidson said. “We’ve had the hockey team and baseball team up there, and some of the club sports for a team event. We help run that for them.”

Liberty students can reserve the paintball course with a group of eight or more to practice like the team or walk on to practice with the team.

Rice is a feature reporter.