‘We haven’t always had this’ 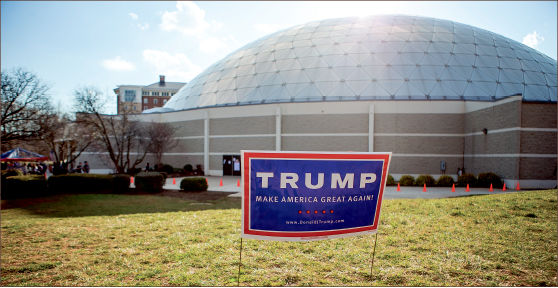 During the daytime Tuesday, March 1, 2016, orange cones could be seen encircling the Vines Center on Liberty University’s campus. Cookies and donuts aplenty were also sitting on a table outside the massive landmark on campus.

Accessibility — Voting for Liberty students was not always so easy. The Vines Center was first used during the 2012 primary election. Photo credit: Leah Seavers

Both sights were unusual to the typical student walking through campus.

However, voting has not always been such a convenient stop for a Liberty student wishing to exercise their right as an American.

“Everybody here now wasn’t around back then, and to current students we’ve always had a precinct,” Lee Beaumont, senior vice president for Auxiliary Services, said. “We’ve haven’t always had this, and it hasn’t always been that way. The only way you get to keep it is exercising your right to vote, or you can lose it if there are not enough votes to justify an on-campus precinct.”

Though almost every student who was around the Liberty campus in 2012 has moved on, many faculty and staff remember 2012 as the year Liberty had polling on campus for the first time.

According to Beaumont, all the way up until the 2012 presidential primary election, students living on campus had to travel to a different precinct.

“In 2008, we didn’t have a polling center on campus,” Beaumont said. “Students had to go across to (Heritage) Elementary School across town.”

Beaumont said because the parking lot could not accommodate all the cars, Liberty had to bus students to the polling center.

Due to the growing number of Liberty students voting, the Heritage Elementary precinct was flooded with voters to the point of over capacity. Students and local residents had to stand in line for an hour or more.

“Of course we completely overwhelmed their precinct because of all the students that were voting,” Beaumont said.

According to a previous article for the Liberty Champion, John Cobb, a member of the Lynchburg Electoral Board, said a precinct has 4,000 registered votes. The registrar has to alert the state board, then they will find a solution.

According to WSET, the number of voters at Heritage Elementary was close to 6,200, so a change needed to be made.

With a goal in mind, it was still not an easy process to find a solution.

“Through all of this, it was a long process,” Beaumont said. “In 2008 we first started saying we want our own polling place. It just takes a while to get there. Finally, we decided upon the Vines Center, and the election officials agreed that the Vines Center would be a good polling location because it worked well.”

According to the Associated Press in December 2011, the U.S. Department of Justice approved the Vines Center polling location plan adopted by the city council in October 2011.

Beaumont said it is common for college students to vote in the area where they attend school. However, there were some opponents to precinct change.

“There were some people unhappy about it in the community that didn’t want our students voting here because they didn’t agree,” Beaumont said. “Most (Liberty) students vote conservatively, and they
had different ideas.”

In the time between 2008 and 2011, when the idea to create a voting precinct on Liberty’s campus came about, students did all they could to show they wanted easier access to a polling location.

“All these students that came before you fought the hard battle,” Beaumont said. “They were the ones riding the buses over to the other precinct to vote and going through all the rigmarole of fighting people who didn’t want Liberty students to vote and didn’t want a precinct on campus.”

Beaumont said students packed inside city hall to speak at city council meetings and spoke about how much they valued voting and wanted accessibility to on-campus Liberty students.

Now that the polling location for Liberty students has been moved to the Vines Center for multiple years now, Beaumont stressed the importance of students exercising their right to vote.

“Ever since the students have been able to vote here, local election officials know whenever they make decisions that they need to keep this constituency in mind,” Beaumont said. “A large population of the city is college students, so the things that interest (college students) all need to be taken into account. That only happens if you exercise your right to vote.”

Beaumont said that in the future, students need to take the extra couple minutes it takes to stop by the Vines Center and vote.

“The precinct is here,” Beaumont said. “We are offering a convenient opportunity to vote. We want you guys to take advantage of it. That’s what it means to live in a representative republic, which is really what we are. (Students should) exercise that vote because there are lot of people around the world who don’t get to do that.”

However, current and future Liberty students would never have had the opportunity to walk five minutes from their residence hall and have a say in the election of government officials if it was not for the students before them.

“It really comes down to your predecessors in the student body who got involved,” Beaumont said. “They wanted to make a difference. They wanted to get involved, and that’s what resulted in what you all have today. … You have your own voting precinct. You have a voice, and the people who are elected know it.”