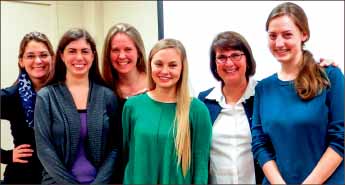 Since its inception in the fall of 2013, Liberty University’s American Sign Language and Interpreting (ASLI) program has been thriving, with its inaugural set of students all passing the Virginia Quality Assurance Screening (VQAS).

Nicole Thorn, the program director and assistant professor of ASLI, said students take the two-part exam and are rated on a four-part scale. In order to pass Liberty standards, students must
receive at least a two.

Students Bethany Steele, Ann Bryant, Jami Macdonald, Kelsey Pate and Hannah Silver all passed the written and oral exam with at least a two. The inaugural class of ASLI students who have passed the VQAS and completed internships are set to graduate in May.

“It was extremely affirming (to see), and (they are) a remarkable group of young ladies, these first five that came through,” Thorn said. “(They are) very motivated and really helped shape the program with their feedback and just how they walked through the program as pioneers.”

According to the Virginia Department for the Deaf and Hard of Hearing, the VQAS is an “assessment process designed to assist you, as a developing professional, to identify your strengths and weaknesses in your knowledge and skills of interpreting in order to assist your growth in interpreting competence.”

According to Thorn, after completing the ASLI 410 class, interpreting professional ethics, students are given the written portion of the VQAS, which focuses mainly on the ethical components of interpreting. The students who pass then complete a practicum of observing nationally certified interpreters.

Thorn said the students then complete the performance part of the VQAS where actual interpreting skills are rated in different settings. After passing with a score of a two or more, students are placed in internships before graduation.

Jami Macdonald, a senior in the ASLI program, said via email the university prepared her well for the VQAS.

“I’d have to say Liberty prepared us for this test by hiring the best team for the job — the instructors we’ve had in this program,” Macdonald, who has already completed a degree in Spanish language and literature, said. “Our classes have been modeled to give us a skill and knowledge base, followed by applied experience, valuable feedback, and exposure to the professional field of interpreting. Our faculty knew when to push us beyond our self-perceived limits and maintained a demonstrated confidence in each of us. They have each invested themselves into our personal and professional development, raising us up by their beautiful worn hands through our quality program, encouraging us every step of the journey.”

According to Thorn, Liberty has had ASLI classes since the 1970s as Sue Wilmington did interpreting for the university and started some sign language classes with interpreting components.

“It’s actually been around for a long time, which was unheard of,” Thorn said. “However, it didn’t have the same structure that follows suit with what’s going on in the current realms of the interpreting world. So in 2012, the RID, the Registry of Interpreters for the Deaf, started requiring a bachelor’s degree to be able to sit for the national exam to be a nationally certified interpreter. That was rather timely because that was the same time that we finished the development of this program. We didn’t roll it out until the fall, but our development finished at the same time that they mandated that requirement.”

Liberty students will not take the National Interpreter Certification exam while at the university, but they are well on their way to becoming prepared for the national test.

Though the official ALSI program at Liberty has only been in effect for a short time, Thorn said the program is growing with each passing year.