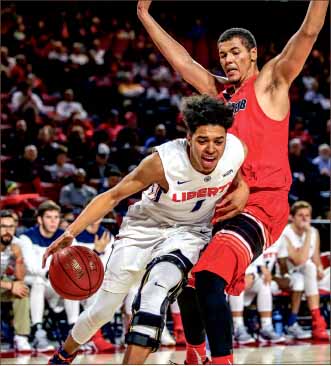 ‘It might sound crazy, but it ain’t no lie’ the Flames secured a first round bye

Live by the three, die by the three. In the regular season finale against the Gardner Webb Runnin’ Bulldogs, the Liberty Flames men’s basketball team did just that in an 86-81 Senior Day victory, Feb. 27.

The Flames could not have asked for a hotter start. An immediate defensive stop led to a quick three from freshman forward Caleb Homesley. After forcing a steal in the next possession, sophomore guard John Dawson maneuvered his way through Gardner-Webb’s defense and found a cocked and loaded Homesly who nailed his second straight three, giving Liberty the early 6-0 lead. 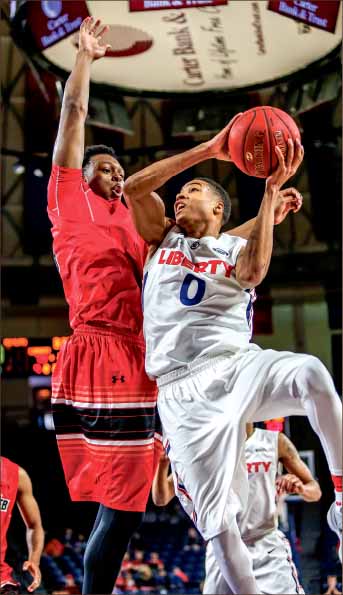 The Bulldogs got on the board with an instant reply from senior guard Adonis Burbage who hit a three. However, Flames sophomore guard Ryan Kemrite netted a corner-pocket trey-ball to put the lead back at six. And in the next possession, the sophomore did the exact same thing from the other corner.

Three minutes in, the Flames were 4-4 from the three-point line and maintaining a commanding 12-3 lead. It was not until the 16-minute mark that Liberty scored elsewhere. With most of the Flames set up shop around the three-point line — as they were for most of the game — they swung the ball from one end to the court, stretching out the Gardner Webb defense, creating a driving lane for senior guard Anthony Fields. Fields blew past a closing-out defender for an easy layup.

Down 17-5, Bulldog senior Harold McBride stopped the bleeding with a corner three. But Flames freshman guard Lovell Cabbil shot the lead back up to 12 with a three on the left wing.

After Cabbil and Homesley both knocked down a three apiece, the Flames, up 26-10, appeared to be running away against the Runnin’ Bulldogs.

Homesley, who finished with a career-high 22 points, drilled his third three of the first half. Then Isaiah Ivey arrived to the party. Gardner Webb’s senior guard buried a corner three. After a pair of free throws from both Gardner Webb’s junior forward Tyrell Nelson and Flames freshman forward Ezra Talbert, Ivey buried another. Liberty’s lead became 11 points.

After another stop, the Bulldogs passed Ivey the ball at the top of the key. Ivey pulled up for another three-pointer, cutting Liberty’s lead to eight points.

A two-minute scoring drought for both teams ended when Ivey found Burbage for his second three of the day. Liberty’s lead dwindled to five points.

Gardner Webb freshman guard Laquincy Rideau joined the ongoing three-point barrage, as he knocked down a three from the top of the key. Then Ivey swished another from downtown as the Bulldogs watched their double-digit deficit become a one-point lead.

“Defensively, we were balanced … until (Ivey) got cookin,” Flames Head Coach Ritchie McKay said. “It didn’t seem like we could stop him.”

The Flames failed to score a single point in more than six minutes. With 3:30 remaining in the first half, Fields sizzled past defenders for a layup, ending the drought and reclaiming the lead, 30-29. But Ivey took the lead right back with his fourth three of the half.

In the first half alone, McKay’s side took 27 field goal attempts and made 12 of them — 20 of those shots were from behind the arc (made 9).

“We shoot a lot of threes,” McKay said. “We want to take what the defense gives us.”

Despite the offensive explosion, there was one player who failed to notch a single point — sophomore point guard John Dawson. But after a halftime speech with his team and coach, the second half would be his.

“We challenged him at halftime,” McKay said. “When (John) doesn’t feel like he’s pulling his end of the bargain, he’ll get a little down on himself. I asked his teammates at halftime ‘do you believe in John Dawson?’ And they all said in a resounding way, ‘yes.’”

Dawson’s team believed in him, and in the second half, he gave them ample reason to. In the first moments of the second half, the guard drove and hit Homesley for an open three. Then, after sizing up the defender, Dawson nailed a quick mid-range jumpshot — his first points of the game. After this, he was in complete control. Dawson either scored or assisted on 17 of the Flames 19 points to start the half.

He, along with Fields’ constant penetration in the paint, was vital in freeing up the outside shot for their teammates.

“All year, we’ve been trying to touch the paint,” Fields said. “That’s kind of been my role as a facilitator and get guys shots. It opens up for our shooters when we’re touching the paint and sharing the ball.”

The Flames dribble-drive gameplan continued to plague Gardner Webb’s defense throughout the second half. Dawson, who finished with 17 despite not scoring in the first half, continued to attack the paint and find open shooters.

But as he had done throughout the game, Ivey — who finished with a career high 32 points — willed the Bulldogs back into it.

Down 60-51, Gardner Webb ignited a 14-5 run, capped off by Ivey’s fifth three of the contest. But Kemrite and Dawson both hit crucial threes in the final minutes to reclaim the lead and ultimately put the Bulldogs away. After the second half offensive explosion, the Flames walked out with the 86-81 victory. And after a little help from Longwood and Radford, Liberty secured the fifth seed and a first round bye in the upcoming Big South Tournament.

“Going into the tournament with a four-game losing streak would have been hard to prevent them from doubting,” McKay said. “It helps us.”

Fields, Liberty’s lone senior who was honored before his final game in the Vines center, echoed his coach’s comments.

“You never want to get too high or too low,” Fields said. “But I feel like if you’re going into the tournament with some momentum that’s always good. … Going in with a win is going to get guys to have more confidence.”

Haywood is the editor-in-chief.