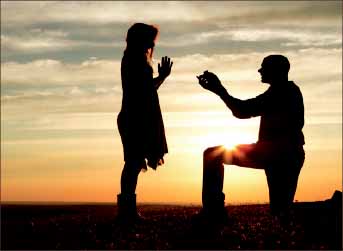 There will be four, maybe five bridesmaids. Gardenias with wide, swirling blooms will beautifully intertwine with the roses’ more delicate, colorful blossoms.

There will be twinkly lights. Maybe not during the ceremony, but they could give the reception hall that enchanted glow — the friendly illusion of a thousand stars glittering warmly, just beyond reach.

Marriage — Liberty students may be getting married younger than most. Google Images

A wedding ceremony lasts only 30 minutes. With allowance for a photographer’s fussing and trivialities, it could take 30 more. This event lasting no longer than one hour commands time and money that far outweigh its longevity. However, the sacrifices demanded by the celebration are nothing compared to those required by the institution.

A wedding is a party, but a marriage is a commitment.

“Till death do us part” is a steep parameter within which to make a promise, and a vow of this magnitude should not be made under environmental influence or peer pressure. At Liberty University and other Christian universities, the pressure for students to marry young is present and detrimental to the success of this divine institution.

The pressure is as subtle as an 8-foot billboard hovering above the student body in the Vines Center.

Three times a week during Convocation, a local jeweler’s glittering engagement ring stares down at the 8,000 young adults in attendance. Administrators do not deny Liberty’s “ring by spring” reputation — rather, they endorse it.

“I use that as a recruiting tool,” President Jerry Falwell said in a News & Advance article on the subject. “It’s a great place to find a mate. I tell parents that it’s a great place for your son or daughter to find (a spouse).”

PSYC 150, psychology of relationships, is a prerequisite that all students need for graduation. This course discusses the different attachment styles and how to adapt these concepts into a well-functioning relationship. For the more advanced, Liberty offers PSYC 361, marriage and family. Both courses, as well as segments of biblical worldview 101 and 102, encourage Christian matrimony.

Besides curriculum influences, Liberty hosts brother- and sister-dorm activities as well as speed dating and other events that encourage students to mingle, therefore accelerating the campus dating process.

Psychology Professor Larry Anderson said in an interview in the same The News & Advance article that he felt Liberty relationships moved faster than most other college students’ relationships.

“I would guess that the average age for the Liberty student (getting married) is a little lower — a year or two younger,” Anderson said.

A biblical marriage is a sacred relationship. It is a bond that brings joy and hardship in equal measure and one that calls for the kind of love that only ignites upon meeting one’s match in another. But in rushing a marriage, God’s own timing can be undermined.

One argument against marrying in college comes from the opportunity cost of other friendships and relationships sacrificed in exchange for a romantic connection. Clinical psychologist Allison Conner spoke on the issue in an interview for Washington Square News.

“Students who marry while in school may be missing out on some experiences that would enhance their life experience and maturity,” Connor said.

She discussed the dangers of young marriage and contributors to its demise.

“Young couples are at the highest risk for divorce,” Conner said. “It is possible that those who marry too young are still maturing, and are not as equipped to deal with the stresses and strains of marriage and family. Not being established professionally is one of those stresses.”

Speaking specifically of an unstable financial base before marriage, Connor believes that not being fiscally independent or steady is a reason to delay the nuptials.

“It is definitely more desirable for a couple to marry when financially independent,” Connor said. “Not only does it protect the integrity of the couple, but the way each handles money will have a chance to be demonstrated to the other beforehand.”

Christian colleges should avoid influencing young couples to rush to wed. Couples should consider psychological maturity and financial security rather than jumping to satisfy social pressures.

There can still be four, maybe five bridesmaids. They will just have to wait a year or so for their chance to catch the bouquet.

Garber is an opinion writer.