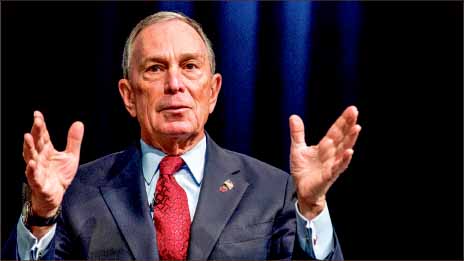 One thing is for sure: The campaign for the 2016 presidential election in the U.S. has been anything but ordinary.

On the side of the Democrats, the potential nominees include a proclaimed socialist, Bernie Sanders, running against former U.S. Secretary of State Hillary Clinton who, according to recent reports, seems to be the focus of a possible indictment from the FBI.

The Republicans do not fair very well on the conventional scale either. With more than 15 candidates announcing their presidential intentions last year, the playing field has now leveled off, and the leader among the majority of polls happens to be far from the norm of politicians: Donald J. Trump. Despite his lack of political experience, the business guru seems to be extremely comfortable in the spotlight and sharing his vision for the future of America — even if some of his claims are viewed as polarizing and inappropriate by many citizens, according to polls.

Interestingly enough, the contenders for the White House in 2016 may not be complete. Rumor has it that the eighth richest person in the U.S., according to Forbes, may just throw his hat into the ring.

While Michael Bloomberg may be rich like Trump, the similarities end there. Bloomberg has experience as a politician and an interesting history among differing political parties. According to a CNN article, the former mayor of New York City was a longtime Democrat before switching to the Republican Party in 2001 and then finally running as an independent during his third campaign for mayor. Sources say that he is “seriously considering” a White House bid, even commissioning a poll last month to see how he would fair as a third-party candidate, according to another CNN article.

“As America becomes more polarized, the desire grows for a candidate in the center focused on building consensus and getting results,” writes Douglas Schoen in the Wall Street Journal. “This is the hidden message of Monday’s caucuses, the one that Mr. Bloomberg is contemplating as he considers a run for president.”

When Kentucky Sen. Rand Paul was asked about such a decision, he responded optimistically, flirting with the idea that Bloomberg could just split the Democratic vote due to his longtime support for greater gun restrictions. Paul told CNN such a split “might be good for Republicans.”

Is this the year of the billionaire in American politics? Or has the bureaucratic stalemate within Washington forced the hand of involvement among privileged individuals who would have otherwise never involved themselves in the headache of government?

If polls are any indication of the mood among Americans, trust for elected officials is among the lowest levels in the past half-century, polling at a mere 19 percent, according to the Pew Research Center last year.

Either the career politicians need to clean up their act in Washington, or they need to brace themselves for other public figures to forcefully enter the equation and solve the issues on their own unconventional terms.

Tomlin is an opinion writer.