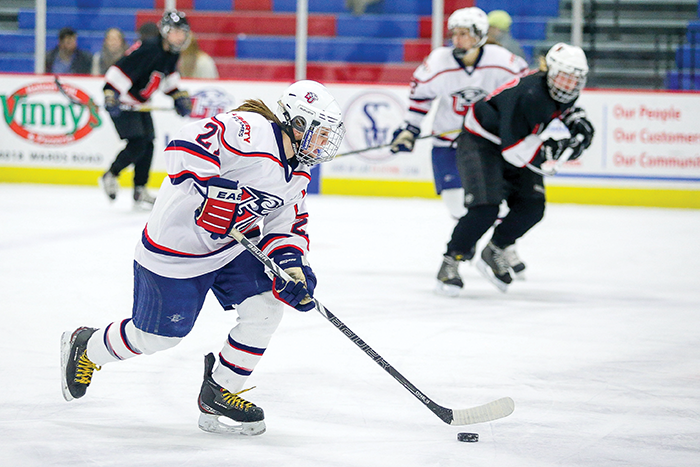 The defending national champions have not lost since September 26, 2015

The Liberty University women’s Division I hockey team continues its success on the ice this season after claiming last year’s ACHA National Championship, the first in the history of the Liberty hockey program.

The championship came from hard work and dedication, two things that Head Coach Paul Bloomfield says are important to the program.

“I am not a very satisfied coach when we are not winning,” Bloomfield said. “We work hard. We recruit hard. We practice hard. We encourage the girls to work hard.”

Despite winning last season’s national championship, the Lady Flames were not ranked No. 1 to start the season, something that struck a chord in the minds of the players, according to sophomore forward Chelsea Greenwood.

“A lot of us thought (not being ranked No.1) was kind of a rip-off considering we won nationals, so how do you not be ranked No. 1?” Greenwood said.

The Lady Flames opened this season with their only loss of the year against the Washington Pride, and
finished the next game against the Pride in a tie.

The Lady Flames caught fire and won 10 of the next 11 games, with the only loss being a forfeit against Grand Valley State.

“We just kind of figured we would be middle of the pack and the team has really been pretty successful,” Bloomfield said. “(The players have) a lot of experience together. I think that has helped. Everybody is playing for each other.”

Outscoring opponents 65-20 is no small feat, and senior forward Catherine Burrell directs that success to a few major keys.

“It definitely helps to be a defensive team and to have strong goalies, which we have both of,” Burrell said. “It also helps to have good scorers and teamwork as well. Everyone needs to be on the same page working together for one goal.”

Freshman wing Lauren McDonald said the key to the team’s performance is their teamwork together.

“(Teamwork) is why we dominate every team we play,” McDonald said.

“Other teams are like, ‘oh (Liberty) is kind of south, they do not know what hockey is,’” Burrell said. “(Proving them wrong) is a really great feeling. I really enjoyed it.”

Despite the accolades that come with winning the first national championship in Liberty hockey program history, Bloomfield believes his program is based on family.

“I love to see girls come and (have) their lives changed,” Bloomfield said. “I love to see them come and grow up, and mature in the Lord. I kind of feel like sometimes I am their dad away from home. It gets a lot more involved than just hockey. We get to know the girls pretty (well). I love working with the girls and being apart of their world and seeing them succeed.”

If the second half of the season is anything like the first half, Bloomfield will see lots of success for the Liberty women’s Division I hockey program.