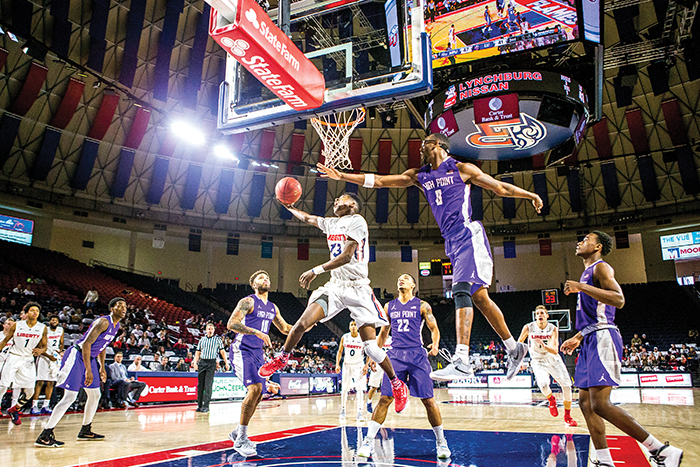 The Liberty Flames men’s basketball team (7-15, 4-5 Big South) found itself tied at 67 against the High Point Panthers (13-7, 6-3 Big So). With less than 20 seconds remaining, the Flames were presented with an opportunity to do something they have failed to do in four years … beat the Panthers in the Vines Center.

Freshman point guard Lovell Cabbil slowly dribbled the basketball while watching the clock, preparing to make his next move. On the low block, a down screen was set for redshirt-sophomore guard John Dawson who dashed to the left wing of the three-point line.

With nine seconds remaining, the ball was in Dawson’s hands. Redshirt freshman Ezra Talbert set a screen for Dawson, but incidentally brought his defender with him, nearly resulting in a double team. However, Dawson’s quick change of direction caused the second defender to slip, leaving him in a one-on-one situation. The redshirt sophomore out of Clovis, New Mexico lowered his head and attacked the basket. With two seconds left, he elevated and sank the go-ahead layup as Liberty knocked off High Point, 69-67 Saturday, Jan. 23. 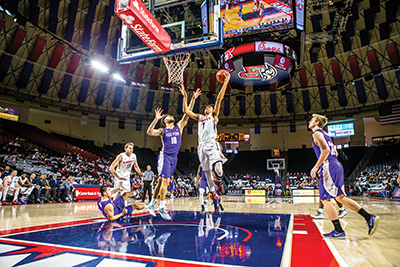 Strength — Freshman Caleb Homesley lays it in during the win against High Point. Homesley had six points. Michela Diddle

The Flames and Panthers traded blows throughout the entire matchup. Cabbil opened scoring for the Flames with a contested three-point shot. However, the Panthers immediately responded with a turnaround fade from redshirt senior forward, John Brown.

The Flames knew containing Brown, the nation’s No. 2 active career scorer per High Point Athletics, was vital if they wanted to get the win.

“Brown is a heck of a player,” Flames head Coach Ritchie McKay said. “We just want to match his physicality. Very few can give more effort than him.”

However, Liberty held the rest of the Panthers players to three points or less each, and forced seven turnovers in the first 20 minutes of play.

On the offensive side, the Flames were almost as effective, shooting 43 percent from the field and 47 percent from behind the arc. Sophomore guard A.C. Reid was responsible for half of the Flames shooting success in the first half (4-7 from the three point line).

“I just told myself to keep being confident and keep shooting,” Reid said. “My teammates put a lot of confidence in me.”
After the half, Liberty had the lead and momentum, however both were short-lived.

The Panthers went on an 11-2 run, reclaiming their first lead since the 8:43 mark in the first half. High Point brought a balanced attack that resulted in four different players contributing. In less than seven minutes, the Flames went from leading by seven, to losing by eight. High Point appeared to be running away with the game until Talbert weathered the storm with a two handed slam, cutting the lead back to six.

Four minutes later, the Flames were only down two. High Point had possession until Dawson stole the ball from Brown. Dawson beat his defender and drove to the baseline. Then, he slung a no-look pass to freshman forward Caleb Homesly, who made the extra pass to a wide open sophomore guard Ryan Kemrite who nailed the three pointer and regained the lead for Liberty.

High Point got to the line in its next two possessions, making all four free throws. And after junior guard Anthony Lindauer scored an easy layup, the Panthers lead returned to five. But just as they did earlier in the half, the Flames fought back with two quick threes by Reid and Talbert.

This was the second time the Flames responded to a potentially devastating run from High Point.

“I was really pleased with our guys,” McKay said. “We had a mental and physical toughness about us that I think helped us stay in the game long enough to win.”

With only three minutes on the clock, the Flames were nursing a one-point lead. In those final three minutes alone, there were four ties and six lead changes, none of which was as impactful as Dawson’s game-winning layup.

Dawson, who finished with 11 points, six assists and seven rebounds, scored his second game winning shot in only 10 games. With the clock winding down and the game on the line, he wanted the ball in his hands.

“My mindset was, ‘We are going to win this game, no matter what it takes,’” Dawson said.

Liberty shot 51 percent from the field and made just about half of their 27 three-point attempts. When asked about how good this team can be when the shots fall as they did against the Panther’s, Reid’s answer was short and to the point.