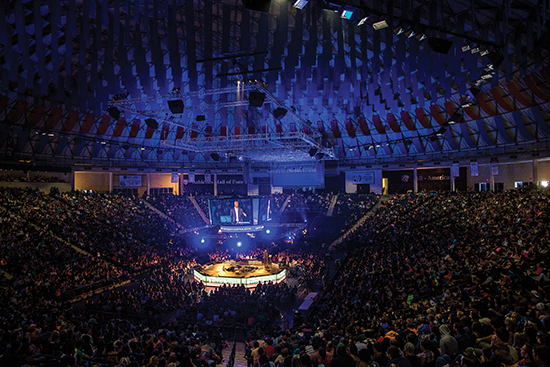 With every new semester at Liberty University, both new and returning speakers take the stage at Convocation. What distinguishes this semester from years past is that every single speaker coming to Convocation was at some point requested by a student.

“Every student has something to look forward to with this lineup,” Dan Bolton, director of Spiritual Programs, said.

Bolton directly oversees Convocation under the Office of Spiritual Programs and is a part of the team that decides who will speak at Convocation. It is also his job to invite and host all of the guests during the duration of their stay at Liberty.
Bolton said it is the strongest semester of speakers yet, and there are a few changes taking place this semester. For the first time ever, this semester will feature a male-only and female-only Convocation where half of the Vines Center will be blocked off, similar to Campus Community on Wednesday night, according to Bolton.

“There’s different issues affecting each of us,” Bolton said. “So this is just going to be a time where they dive in and talk about men’s (and women’s) issues.”

The all-male Convocation will take place Feb. 29 with Dennis Rainey, who serves as the president and CEO of FamilyLife, part of the ministry CRU, as the keynote speaker. The all-female Convocation will take place April 25 with Christine Caine, founder of The A21 Campaign, an anti-human trafficking organization, and Propel Women, which helps women “fulfill their purpose, passion and potential,” according to the organization’s website.

Compassion International will feature a 2,000-square-foot mobile experience in front of the bookstore, where students, through the use of iPods and headsets distributed to all attendees, can understand a child’s life from somewhere around the world. According to the Compassion International website, the exhibit allows people to experience the realities of worldwide poverty.

“We’re bringing (Compassion International) in to partner with them, to connect students to some of the world’s neediest people,” Bolton said.

There is one speaker in particular who is close to one of the student workers for Convocation. On April 8, David Stone, the senior pastor of Southeast Christian Church and the father of Sam Stone, the student assistant to the director of Convocation, will be speaking.

“That is definitely the Convo that I am most excited about,” Sam Stone said.

Before his father came to speak in Convocation in 2012, Sam Stone had never heard of Liberty, but his father
suggested that he accompany him to the school. They stayed in the president’s mansion, and Sam Stone said those two days played a large part in his decision to come to the school. Sam Stone, who also serves as a spiritual life coach on East Campus and as the junior class president, will get to introduce his father when he comes to speak in Convocation.

The last Convocation of the semester April 29 will feature Senior Vice President for Spiritual Development David Nasser and President Falwell for a day of bluegrass and Bluebell ice cream. According to Bolton, Nasser and Falwell will discuss some of the highlights from the school year and what some of the expectations can be for the next year including some of the guests that will be speaking at Convocation. As for bluegrass and Bluebell ice cream, Bolton said they simply thought it sounded like fun.