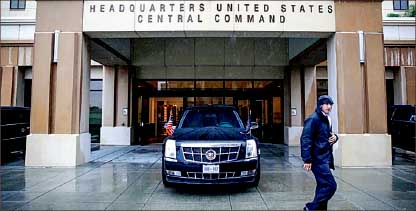 While we were all enjoying our Thanksgiving break, the New York Times was reporting the latest Obama Administration scandal. On Nov. 21, the Times published an article that stated the Pentagon inspector general was investigating claims that military intelligence had been significantly changed by senior intelligence officials.

Specifically, intelligence analysts at the United States Central Command (CENTCOM) had produced military intelligence assessments detailing the failure of the Iraqi Army in combating ISIS forces and the growth of ISIS in the region and all around the world. These CENTCOM analysts are now claiming these reports were significantly altered by their supervisors and then
provided to the president.

“The analysts say supervisors were particularly eager to paint a more optimistic picture of America’s role in the conflict than was warranted,” the New York Times article states.

The intelligence reports coming from the CENTCOM analysts and others in the intelligence community are not welcome in the Obama Administration because it stands in stark contrast to what the president has stated on international terrorism. Beginning with his 2012 reelection campaign and continuing into his second term, President Obama said numerous times that terrorism around the world had decreased under his watch and that Al Qaeda, specifically, had been “decimated.” Later, Obama referred to ISIS flippantly as “a (junior varsity) team.”

While this New York Times article asserts that the senior intelligence officers are to be blamed, I believe that this reflects a leadership issue that runs deep within the White House.

“The inability or refusal of government leaders to listen to new, independent information that challenges their policies is the most important failing in every capital I have observed in 35 years of government-watching,” Jim Hoagland wrote in The Washington Post.

This “inability or refusal” is not new to Obama but has been a characteristic of many administrations. The quote above from Hoagland is in reference to a scandal that arose in 2000 when an investigation was launched into whether then-Vice President Al Gore had “kept himself ‘deliberately uninformed’ about corruption and other problems that would have undermined Bill
Clinton’s Russia policies.”

Along with this, it has long been understood by political historians that Lyndon B. Johnson suffered from this same problem. Johnson had staked his presidency on the war in Vietnam and would not see any intelligence that concluded the war was not a going well. This blindness to the facts of the situation would ultimately cost Johnson a second full term in the White House.

The president and his upper leadership’s refusal to acknowledge information contrary to what it wants to hear is already proving to be detrimental to the U.S. and the world. With recent terrorist attacks in both Paris and California, it has become increasingly clear that ISIS is not merely a “JV team” but that it is a major force to be reckoned with. Nevertheless, the president and the Democratic Party as a whole seem content to pontificate on climate change and gun control without addressing the deeper national security issue at play.

The president and his advisors would do well to learn from King Solomon: “The way of the fool is right in his own eyes, but a wise man listens to advice (Proverbs 12:15, ESV).”