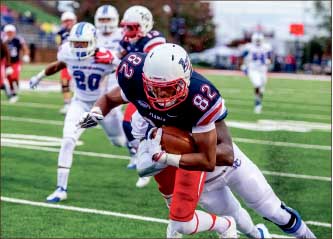 Flames beat the Blue Hose to go above .500 for first time since September

Timber — B.J. Farrow was brought down from behind during the win on Saturday. Photo credit: Leah Seavers

The Flames (5-4, 2-2 BSC) won their seventh straight game against the Blue Hose (1-8, 0-4 BSC), who have yet to win at Williams Stadium. It was also the first time this season the Flames have won back-to-back games.

Redshirt freshman quarterback Ben Cheek completed only three passes on 18 attempts for 31 yards and was intercepted three times for the Blue Hose. Cheek’s success came on the ground, as he carried the ball 14 times for 68 yards to pace the Blue Hose rushing attack, which outgained the Flames 191-73.

“Our offensive line didn’t quite play as well,” Flames Head Coach Turner Gill said. “(Presbyterian’s) defensive line really controlled the line of scrimmage … we knew they had a good defense, but we should have been able to run the ball better than (how) we did.”

In a soggy game where defense reigned, Presbyterian’s offense began with a three-and-out and was forced to punt. Liberty’s offense followed by driving down to the Blue Hose 23-yard line before the drive stalled out. Senior kicker John Lunsford then had his 40-yard field goal attempt blocked and returned all the way to the Flames 46-yard line with 8:02 remaining in the first quarter. It was the fifth time this season Lunsford has had a kick blocked, making him 11-of-22 (50 percent) on field goals this season.

On the ensuing drive, the Blue Hose got into the red zone and had first-and-goal from the Liberty 4-yard line, but had to settle for a 24-yard field goal from freshman kicker Brett Norton to take a 3-0 with 4:56 left in the first quarter.

The Flames had a chance to answer late in the first quarter after Cheek fumbled on an option play deep in his own territory to set up first down on the Presbyterian 11-yard line. The Flames elected to go for it on fourth-and-one from the two-yard line, but were stopped and came away with nothing.

Liberty would not score until the beginning of the second quarter. Freshman receiver Zac Parker returned a punt 23 yards to set up a first down at the Presbyterian 39-yard line.

On the second play of the drive, Macon took a pitch from Woodrum 24 yards down the right sideline and into the endzone to give the Flames a 7-3 lead with 12:24 to play in the first half.

“(I was) just being patient with all of (my) runs,” Macon said. “And just trusting my offensive line to pick up all their blocks.”

The next score of the game did not come until 6:33 in the third quarter. Cheek led his team on a 14-play, 82-yard drive in which the Blue Hose converted twice on third down and once on fourth down. Redshirt sophomore running back Darrell Bridges capped off the drive with a 9-yard touchdown run to put Presbyterian back on top, 10-7.

The Flames offense only ran six plays in the third quarter for a total of two yards and trailed, 10-7, heading into the fourth quarter. However, after a 30-yard field goal from Norton to made it 13-7 with 6:58 left in the fourth, the Flames offense came to life.

On the Flames following drive, Macon found the endzone for the second time of the night to put Liberty back in the lead, 14-13. The drive was kept alive by a pass interference call against Blue Hose cornerback Steve Osondu, which gave the Flames first-and-goal on the two-yard line. Macon punched it in on the next play.

“We just started making plays,” Woodrum said. “We had opportunities to (make plays) in the first half and in the third quarter and we just weren’t making them. I played bad all game until the fourth quarter and that’s when I finally started hitting my marks.”

The Blue Hose got the ball back with 3:49 left and two timeouts remaining on their own 25-yard line. On second down, Cheek had a quick pass deflect straight up into the air off junior receiver Daryl Wilson and was intercepted by Flames senior linebacker Jimmy O’Grady, who returned it to the 9-yard line.

Three plays later, senior running back Desmond Rice, who had been held to zero yards on five carries to that point, powered his way into the endzone to extend the Flames lead to 21-13 with 1:43 left in the game.

Presbyterian had one final chance to mount a comeback, but Cheek was picked off again, this time by sophomore cornerback Tyrin Holloway, to seal the win for the Flames.

The Flames will travel to Charleston, S.C., next Saturday as they meet the No. 15 Charleston Southern Buccaneers (7-1, 4-0 BSC), who clinched the Big South’s outright bid to the FCS playoffs this past week with a 28-14 win over Kennesaw State. Kickoff at Buccaneer Field is slated for 2 p.m. on Nov. 14.