Trump: his own achilles 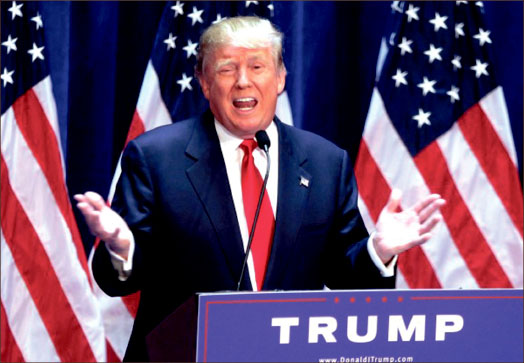 CAMPAIGNING — Businessman Donald Trump continues to surge in the polls despite his lack of previous political experience. Google Images

In the past weeks, one name has continuously found a home in the headlines when discussing the Republican lineup for the 2016 presidential race: Donald Trump.

From fiery interviews to taking jabs at media figures, Trump never disappoints when it comes to telling the world how he really feels. One question remains when speaking of his run for the presidency though. Is Trump a real contender, or is his success just a passing fad that is the result of his brash personality and reluctance to conform to social mores?

In truth, I believe Trump is just a passing fad. In a lineup of less-than-impressive candidates for the 2016 election on both sides of the field, the American people are looking for someone impetuous who is not afraid to speak his or her mind, and that is Trump in a nutshell.

This can be seen no more clearly than in the Fox News debate that took place in Cleveland, Ohio on Aug. 6. During the debate on Fox News, Megyn Kelly commented on Trump’s unfiltered mouth in some of her first remarks to him.

“Mr. Trump, one of the things people love about you is you speak your mind and you don’t use a politician’s filter,” Kelly said.

She then quickly moved to how this action is not without its downsides as he has a history of making disparaging comments about women.

“Only Rosie O’Donnell…” Trump said in response. “If you don’t like it, I’m sorry. I’ve been very nice to you, although I could probably maybe not be, based on the way you have treated me.”

Trump did not stop there. On his Twitter account, on Aug. 24, Trump retweeted tweets that described Kelly as a “bimbo” and suggested she should take another vacation. While Kelly was doing her job of analyzing comments made by the candidate hopefuls, Trump took the comments personally and created a scene in which Kelly was his target.

With gender equality at such a pivotal place in the world today, such sexist comments cannot be tolerated from a candidate atop the polls of a major political party.

His misogynistic views and pettiness are not his only flaws though. Trump also has a record of making enemies of entire demographics. Many are of the Latino community after Trump’s harsh comments about illegal Mexican immigrants.

The immigration problem in the U.S. has been well documented. The Department of Homeland Security’s most recent estimate says there are 11.4 million undocumented immigrants in the country. Trump has taken advantage of this fact, making uninformed remarks in order to draw more attention to himself.

“The Mexican Government is forcing their most unwanted people into the United States,” said Trump in a statement according to The Washington Post. “They are, in many cases, criminals, drug dealers, rapists, etc.”

This disrespect for a heritage that many Americans share is uncalled for, and it has turned many Latino Americans against him. Ashley Parker of The New York Times reports that many “El Mandril” radio listeners in Los Angeles refer to Trump “simply as Hitler.”

While Donald Trump’s quick remarks and harsh mouth have gained him followers so far in the race to 2016, I believe that this momentum will not last. Instead of expressing support for Trump and his “policies,” the American people are purely sending a message to those who want to lead this country that a change is needed.

His name comes with notoriety and he is a known businessman and television personality, which increases his popularity, but as America meets the other candidates Trump will fade into the background. Once the American people finish getting their message across about the problems with political correctness they will see Trump for who he really is: a grumpy old man with a lot of money, a loud mouth, big hair, and too much time on his hands.

STEFANICK is an opinion writer.