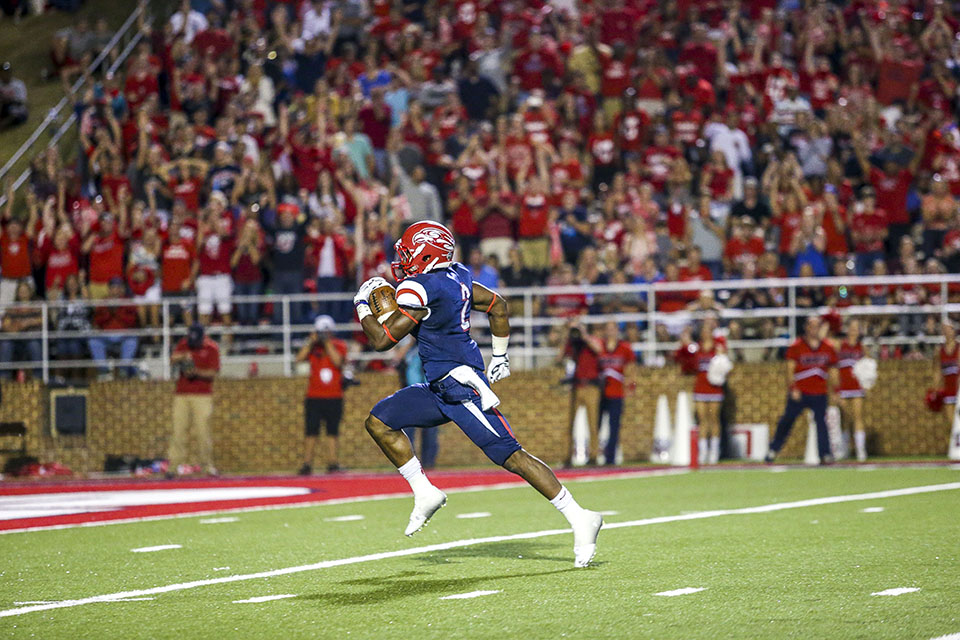 It was a big day for the Liberty football team, as the Flames upset the No. 7 Montana Grizzlies 31-21 in front of a record crowd Saturday, Sept. 19.

The Flames entered Saturday ranked No. 14 in the FCS Coaches’ Poll. Following the upset victory, however, the Flames moved up to claim the 10th spot in the weekly poll, the highest program ranking since 1990. Saturday also marked the first top 15 matchup in Williams Stadium history.

In front of a record home attendance of 22,551, according to Liberty Flames Athletics, the Flames built a strong lead and never looked back. Montana had several late chances to close the gap, but the Flames defense held strong.

Flames Head Coach Turner Gill emphasized the role that the record-setting home crowd had in the Flames win.

“The fans were fantastic,” Gill said. “We love them … they were definitely a factor in this football game.”

Liberty jumped to an early 17-0 lead in the first half. The first score came on a 4-yard pass from Woodrum to senior running back Desmond Rice. Less than a minute later, the Flames got the ball back, and Woodrum launched the ball downfield to Shells for a 72-yard score.

Early in the second quarter, senior kicker John Lunsford added a 22-yard field goal, giving the Flames the 17-0 lead. Montana responded quickly with two field goals from Grizzlies kicker Daniel Sullivan and a 70-yard touchdown pass from quarterback Chad Chalich to Jamaal Jones, which pulled the Grizzlies to within five points at the half. Chalich replaced Grizzlies starting quarterback Brady Gustafson midway through the first half after Gustafson sustained a leg injury.

After the Flames defense forced a three-and-out early in the second half, the Flames offense caught the Grizzlies off-guard with a trick play. Liberty true freshman wide receiver Damian King threw a 32-yard touchdown pass to Shells, putting the Flames up 24-12. Montana responded yet again as Chalich capped off an 11-play, 81-yard drive by running it in himself from one yard out to bring the score to 24-19.

The Grizzlies had the ball again late in the third and Chalich tossed a 46-yard pass to Jamaal Jones to set up first-and-goal at the Liberty 4-yard line.

With Montana on the verge of scoring, Liberty’s defense needed a stop. They delivered, as Flames senior defensive tackle Nolan Spicer forced Grizzlies running back Joey Counts to fumble, and the Flames recovered the ball.

The Flames defense was in the backfield often, posting seven sacks and 11 tackles for loss while holding the Grizzlies to 21 rushing yards. Flames senior defensive end Chima Uzowihe had two sacks of his own, making him the all-time sack leader in both program and Big South history (22.5), according to libertyflames.com.

On the second play of the fourth quarter, Flames senior running back D.J. Abnar took the ball up the middle for 40 yards and the score, giving Liberty a 31-19 lead.

“When you’re trying to finish those big games in those big-time moments, that’s what great players do,” Abnar said. “We have to be great players.”

The Flames never looked back, holding the Grizzlies out of the end zone with another strong goal line stand late in the fourth. After taking a time-killing team safety to make it 31-21, the Flames closed out the Grizzlies.

“I think this win tells everybody across the country that we’re to be reckoned with,” Gill said. “We’re a good football team, we got a good football program, and we’re going to be around for a while.”

The Flames head into a difficult four-game road trip, beginning Saturday, Sept. 26, when they travel to Carbondale, Illinois to take on the Southern Illinois Salukis.