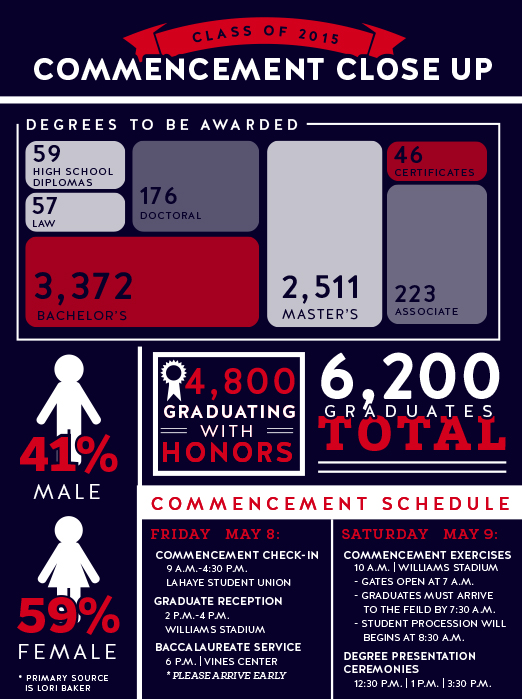 Around commencement time each year, the Liberty University Commencement Facebook page floods graduates’ newsfeed with answers to questions, contests for club seats and facts about the ceremony.

Though the posts remain nameless someone is in charge of replying to emails and questions. That is where Lori Baker and her team come in, the unsung heroes who plan commencement every year.

“This is my eighth year coordinating commencement,” Baker said. “I began working at Liberty in 2003 doing IT Project Management.”

Back in 2007, while Baker worked under Larry Shackleton, the former vice president of administrative information management, Baker said she offered to help her boss set things up for commencement.

“He jokingly said, ‘Be careful what you ask for,’” Baker said. “And I ran commencement that next year.”

However, Baker’s job is not just answering emails. Baker explained how intricate commencement planning is.

“Commencement touches just about every office at the university, and it absolutely would not happen without the involvement of these offices,” Baker said. “We have key leadership in each of the areas such as Field Ops, Marketing, Event Productions, LUPD and many more, and without them, commencement would not happen. It is a huge team effort, and it is so neat to see everything come together. My role in this is to bring those teams together and to facilitate to make sure that everything happens.”

Baker said that life after March includes answering 200 to 300 emails a night and going to a lot of planning meetings. Yet, Baker and her team get to see their hard work pay off with graduation.
“Myself and some of my team basically do not leave campus that week,” Baker said. “We stay on campus and work until the wee hours of the morning. I would not miss the big day for anything. I always joke that it is like planning a wedding for 6,000 brides.”

Sometimes there is a little chaos involved. Baker told of a mishap she had back in 2012.

“It was the Thursday prior to commencement, and we were driving around campus in the dark in a golf cart doing various set up things,” Baker said. “I almost went over an entire set of stairs at the football field where I thought there was a ramp.”

Baker said that her favorite part is watching those 6,000 brides, or students, make their way onto the football field.

“Typically, I tear up each year when this starts,” Baker said. “We start working in October on commencement, and it is the culmination of all of that work. It really is for the graduates, and the excitement that I feel for them at this point is amazing.”

Baker said that commencement would never be possible without the communication and planning that goes into it.

“Information is power,” Baker said. “And by communicating and disseminating details to the parties involved, you are setting them up to be able to make decisions and communicate on their own, which in turn shows a well-coordinated effort to our graduates and guests.”

However, once the ceremony is over and campus is empty for the summer, Baker takes her well-deserved break.

“I usually take a long vacation a couple weeks after commencement,” Baker said. “Then we will jump in on mapping out suggestions for the following year and life goes on in the office.”

WALSH is a feature reporter.