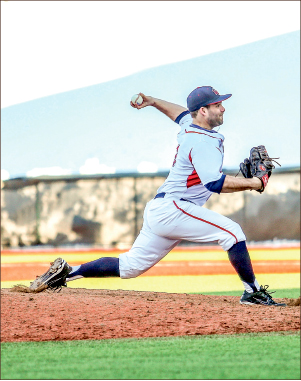 When Liberty baseball’s Shawn Clowers needed a changeup, he found it in the pitch.

After two mediocre seasons with the Flames, the left-handed pitcher was left dissatisfied with his performance.

“I didn’t have a lot of success my first couple years,” Clowers said. “With the speed of the game changing and getting faster and me trying too hard, probably, the first two years weren’t too good.”

Now, flash forward to the start of this season. The senior is coming off a 2014 Gregg Olson “Breakout” Player of the Year semifinalist season. He led the team with 23 appearances on the mound, claiming a 9-0 record — including his first collegiate career win — over 54 1/3 innings and pitching a school single-season record .83 ERA. Opposing hitters were held to a .166 batting average versus Clowers.

So what changed? “My changeup got a lot better my junior year,” Clowers said.

The changeup looks like a fastball leaving a pitcher’s hand but is slower and dives before reaching the batter.

During summer baseball after his sophomore year, as pitchers are apt to do, Clowers was playing with his grips. Fiddling with the way he held the ball and throwing experimental pitches, Clowers hit upon one grip with a lot of movement — something he had struggled to achieve in his changeup in the past.

“I was just playing catch one day and found it,” Clowers said. “It moved a lot, and I kept throwing it and it was consistent, so I just rolled with it.”

As Clowers rolled with the pitch, so too did opposing batters’ hits — the trajectory of his throw caused right-handed batters in particular to swing on top of the ball and ground out.

“I don’t get a lot of swing and misses, but I do get a lot of ground ball outs,” Clowers said. “I try to change speeds, get (batters) out in front and then just try to get quick outs.”

While the lefty expressed dissatisfaction in the outs he has accumulated on the season so far and a desire to improve his numbers by season’s end, his 2.15 ERA in 10 appearances has contributed to a quiet but strong start for a Flames team primed to make yet another big postseason run.

“We started out kind of slow, which last year that’s what we did and then went on a phenomenal run,” Clowers said. “Here, lately we’ve been playing well — hitting, pitching and playing the field. It’s going good.”

Clowers has played a big part in the success of his team, and he and his fellow Flames are looking to surpass themselves once more. It is safe to say, though, that Clowers may never experience a bigger leap than the one he made from his under- to upper-classman career — all thanks to a changeup in his changeup.