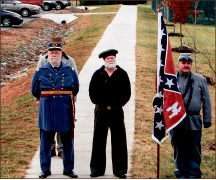 History Department commemorates the 150th anniversary of the Civil War

Liberty University’s 19th Annual Civil War Seminar commemorated the 150th anniversary of the end of the war by focusing on its final year — 1865. The seminar took place March 27-28 and began with an evening banquet and keynote address, followed by a day of lectures by renowned Civil War experts.

The event, hosted by the Department of History, sought to inform guests about the most important moments in the war and how they shaped today’s society.

“I hope guests have a greater understanding of why the Civil War was so important — a defining moment in American history,” Liberty professor Christopher Jones said.

“It helps us understand why our nation is the way it is today both culturally and politically.”

Dr. Steven Woodworth, a professor at Texas Christian University and author and contributor to more than 30 books on the subject, addressed the audience Friday night with a message about President Abraham Lincoln and also closed out the event Saturday afternoon. Woodworth emphasized the vast number of lessons that can be learned from such a trying period in the nation’s history.

“Aside from any specific lesson we learn, I think we also gain wisdom from history,” Woodworth said. “I think there’s much to be gained from learning how people dealt with very difficult times.”

The second day featured five sessions on various aspects of the war. David Jon White, a returning speaker, detailed the elections that took place in Virginia during the war, and Dr. James Finck of the University of Science and Arts of Oklahoma discussed the governor’s race in Kentucky. Each of the speakers shared from his specific area of expertise and was available to answer questions from the audience.

The seminar welcomed guests of varying degrees of knowledge about the Civil War. There were some who had been studying the period for many years, while others were not as well versed on the subject. The speakers kept both parties in mind by providing background information before exploring topics in depth.

Among the crowd of more than 100 was Liberty senior Becky Barker, a history student and Civil War enthusiast. After discovering some of her ancestors fought in the war, she became eager to learn more.

“I was here last year, and it was very informative,” Barker said. “It’s always interesting to hear different perspectives on what happened and hear insights on things I didn’t know about. It’s a great way to expand my historical knowledge.”

Lucius Clay, attending the seminar for the sixth time, said he has always been interested in the war. He noted that he continues to attend the event because it features something different every year.

“The Civil War has it all, whether you’re interested in individual courage, morality or military tactics,” Clay said. “It was a huge transition. It’s fascinating,”

CLARKE is a feature reporter.