Trials and triumphs of training 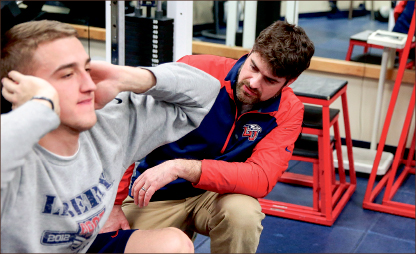 Aaron Schreiner works behind the scenes to ensure student-athletes’ safety

When athletes go crashing to the floor, audiences are silenced, doing the only thing they know how to do — wait. But in those moments, while everyone else is frozen in fear, athletic trainers, including Liberty’s men’s basketball trainer Aaron Schreiner, jump into action.

While athletic trainers are noticed when an athlete goes down during play, Schreiner’s work stretches far beyond the confines of the court on game days.

“We’re a profession that I think is served best when we’re not seen or we’re not noticed,” Schreiner said. “We’re doing our job and things are going smoothly when you don’t see us. When you do see us a lot, it’s probably not a good thing.”

According to Schreiner, who also works as the athletic trainer for Liberty’s men’s golf team and holds the title of rehab coordinator, he can be thought of as a gatekeeper. Schreiner assesses injuries, communicates with coaching staffs and medical professionals and refers student-athletes to doctors for everything from the common cold to a season-ending injury. A good chunk of Schreiner’s job also includes working with student-athletes to prevent and rehab injuries.

Junior Joe Retic, a point guard on Liberty’s men’s basketball team, recently returned to the court after working with Schreiner to rehab a fractured foot that caused him to miss 12 games.

“(Schreiner) gives me confidence every day,” Retic said. “He has just taken his time with me, making sure I (was) 100 percent healthy when I got back out there so that no injury happens again.

He’s kind of like our den mother here for us. He makes sure everything is good for us. He made sure I didn’t get down on myself because it happened in the middle of the season. He (helps to) uplift our spirits, especially me. … He’s part of the reason — he is the reason — I’m back, and I love him for that. I wouldn’t want anybody else.”

In addition to the one-on-one work with the athletes, Schreiner also spends time filling out paperwork to ensure the players on the teams he works with all receive the appropriate care.

“There’s always enough work,” Schreiner said. “I could sit in that office and do paperwork and not get up for probably three days and still have work to do afterward.”

Schreiner said that in the years since 2005, when he earned a master’s of science in clinical Kinesiology from the University of Toledo and started working at Liberty, he has experienced the difficulties that come along with the title of athletic trainer.

“One thing that (I have learned) is if this job isn’t your mission field, it’ll chew you up, spit you out, and you’ll be burned out before you know it,” Schreiner said. “… It will take everything you’ll give it out of you and then ask for more.”

Schreiner explained that during basketball season, 12-hour days are the norm rather than the exception. However, despite the long hours, he relishes the opportunity to serve others.

(You have to know that) kids, at times, have disappointments and frustrations, and … you try to work through that and still make them better in the end both physically and emotionally. … If you work really hard and you take care of kids and you take care of coaches, they believe you when you say that you care.”

According to Schreiner, the best part of his job is the chance to be a part of the path student-athletes travel — from an injury to a full recovery — and the lessons they learn along the way.

“A lot of these guys are performance-based, and their identity is wrapped up in who they are and how they perform, and injury will take that from you,” Schreiner said. “And I think God is a good God, and he’ll do things to get your attention. He’ll basically say, ‘Do you want to serve me? Do you want to know me or do you want this to just be about you?’ In these moments where you see, I think, the Lord give someone an obstacle to see what they will do through it, and then watch them come through the obstacle and watch them succeed again is really awesome.”

Though “God bless caffeine” may be the mantra of a sleep-deprived Schreiner, he said he has no plans to stop serving Liberty student-athletes through his work as an athletic trainer any time soon.

“I think when I’m finally done with (athletic training), I’ll flip burgers somewhere (or) run a family restaurant,” Schreiner said. “I think I’ll be done when I’m done here. But as of right now, I’ve got no other plans.”

BROWN is the editor-in-chief