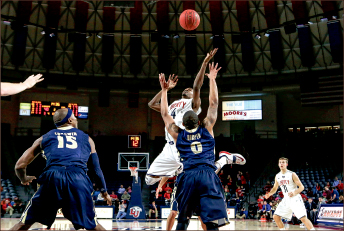 After losses to the High Point University (HPU) Panthers and Charleston Southern University (CSU) Buccaneers Thursday and Saturday, Jan. 29 and 31, Liberty’s conference losing streak extended to 10 games. The Flames are now 0-10 in the Big South and have an overall record of 6-17.

Liberty 53, High Point 53
After Panthers guard Jorge Perez-Laham made one of two free throws 30 seconds into the game against HPU Thursday, senior forward Drew Smith hit a baseline jumpshot to give the Flames the 2-1 lead. Seconds later, Panthers guard Devante Wallace — a 37 percent three-point shooter per espn.com — nailed a three to get the lead right back, and High Point maintained that lead all the way to the final buzzer.

Wallace’s three ignited an early run for the Panthers as they added five unanswered to go on an 8-0 run. Meanwhile, the Flames could not crack the code of HPU’s defense. After Smith’s basket in the first two minutes, the Flames did not notch another point until the 14-minute mark, nearly four minutes later.

Forward Theo Johnson was ultimately responsible for ending the Flames scoring drought as he drove through Panther defenders for a layup.

James Johnson, the versatile forward who transferred from College of Charleston, has given the Flames a much-needed spark on offense in the absence of senior forward Tomasz Gielo. This season, he currently averages just less than eight points a game. But in the 12 games he has started, he averages 11 points per game, which is highest among active players who have started 10 or more games.

“Theo (Johnson) is consistently getting better,” Flames Head Coach Dale Layer said. “We’re seeing the real Theo. He … (is) becoming one of our most consistent and dependable guys.”

After Theo Johnson got on the board, center James Johnson followed suit with a post hook, cutting the lead to three. However, HPU responded with another three-pointer, this time from junior guard Adam Weary. During Liberty’s next possession, freshman point guard Jordan Dembley turned the ball over, which led to an easy layup for the Panthers.

HPU added six more points in two minutes, going on another 8-0 run and increasing the lead 20-6. At this point, Layer instantly called a timeout and verbally expressed his disapproval of how the team was performing.

“I was unhappy with a little bit of the effort and a little bit of the execution,” Layer said. “We weren’t clicking the way we should be. We were settling for jump shots and not mixing our game up. We were giving up offensive rebounds and not finishing plays. If you’re playing against the best team in the league, … you can’t get in a hole like that.”

Out of the timeout, Theo Johnson and James Johnson were responsible for a Flames run.

Down 14, Theo Johnson hit a mid-range jumper and was subsequently fouled. After making the extra free throw, Theo Johnson and James Johnson combined for an 11-0 run of their own, cutting the lead to three. However, the Panthers bounced back.

Nursing a 22-19 lead, Weary and the Panthers increased the lead to eight. But with two minutes left in the first half, Moller hit a three, bringing the Flames within five.

Weary earned his 10th and 11th points from the foul line. With 30 seconds on the clock, Panthers guard Devante Wallace scored two of his eight first-half points with a layup, increasing the lead to nine.

As Moller brought the ball up the court, Layer indicated that he wanted the Flames to take the last shot in the half. As the clock wound down, Moller attacked the defense and rose for a layup. The shot rimmed in and out when Smith elevated and tipped the ball in as the buzzer sounded.

Despite the rough start, the Flames were only down seven at halftime.

“We had to correct some things,” Layer said. “And I think we did. We started attacking the rim and we started mixing our game up. We got some stops and some rebounds. (They played) like I wanted them to play.”

Despite out-rebounding the Buccaneers 30-28 and hitting more than twice their shots from beyond the arc, the Flames handed their opponents 21 points off 17 turnovers and were unable to overcome the deficit before the final buzzer.

“We have to tip our hat to them,” Layer said. “I thought our guys fought extremely hard. We out-shot them, we out-rebounded them. … (We) just didn’t have quite enough good possessions to beat a good team.”

CSU standout guards Saah Nimley and Arlon Harper were known threats coming into the matchup. While the pair was held to eight points each in the flow of the game, they turned the Flames defensive focus into opportunities for other less-tightly guarded teammates and drove the lane to draw fouls, resulting in 16 combined free throw points.

“Nimley imposed his will on the game,” Layer said. “He didn’t have a great shooting night, but he got to the free-throw line and made the right decisions with the ball. He and Harper are really good players. I thought they were probably the difference (in the game) — their poise and maturity were just enough to keep them in the lead and us at bay.”

While the postgame mood was heavy, the night had a silver lining. Hoping to spark and create some energy for his team, Layer tried a new combination of players at the start, including freshman point guard Jordan Dembley’s first in his college career.

“(Dembley) played great for a guy who hasn’t played much all year,” Layer said. “He’s steadily improving and he’s being rewarded for that. He had a nice game, made some good decisions, made some nice passes and defended pretty well. (I’m) very pleased with his effort.”

Additionally, Smith and junior forward David Andoh each had big games for the Flames. Smith led the team with 14 points, five rebounds and two assists on the night. Andoh, playing what Layer called his best basketball game of the season throughout the second half, finished the night with 12 points (including six straight in the final minutes), six rebounds and a blocked shot.

“I think our energy gave us a chance to (win) down the stretch,” Smith said. “I think we are getting better every day. … You’ve just got to keep fighting. You can’t give in one day. We’ve just got to come back one day at a time and put good days together.”

The Flames next chance to end the streak comes Wednesday, Feb. 4 at seventh-ranked Winthrop University.

HAYWOOD is the asst. sports editor.