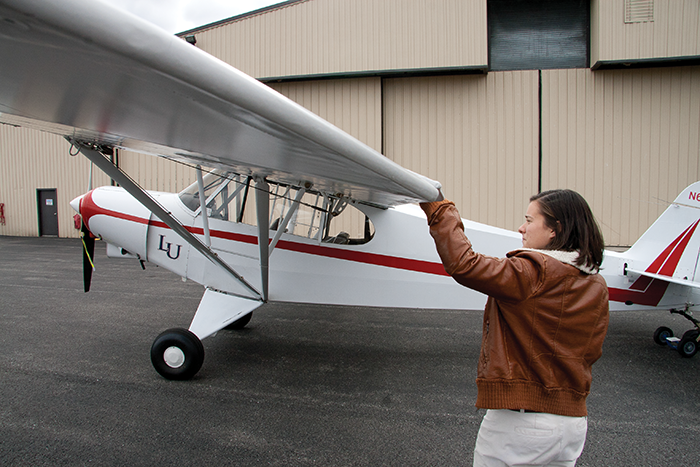 Super Cub — Former School of Aeronautics student Jodi Jacob checks out the Piper Super Cub involved in today’s accident. The plane was donated by missionary couple Martin and Gracia Burham after they were imprisoned for a year in the Philippines. Martin was killed in a rescue attempt. Photo credit: Carter Bowns

A Liberty University-owned Piper Super Cub was forced to land in a wooded area between Rustburg and Gladys, Virginia, around 4:45 p.m. Wednesday, Feb. 4. The single engine plane was flown by one of the School of Aeronautics’ certified flight instructors (CFI) and a student. Both pilots walked away from the accident without serious injury.

The National Transportation Safety Board (NTSB) and Federal Aviation Administration (FAA) investigate all aircraft accidents and place stringent requirements on the release of information surrounding the incident.

School of Aeronautics Director of Safety Andrew Walton said that the State Police would likely release the names of both individuals Thursday morning, but the NTSB is withholding any further information.

“The NTSB is the sole source of information regarding an aircraft accident and takes this responsibility very seriously,” he said.

The School of Aeronautics continually prepares for this kind of event, however. One graduate of the program described the department’s emergency checklist as the “nuclear launch codes.”

“They’ve been (preparing) for something like this to happen,” he said. “None of us wanted to be the guy who (ruined the safety streak).”

Walton explained the safety system and checklist discipline as part of the School of Aeronautics culture leading to its “excellent safety record.”

The CFI who flew the Piper Cub is one of the school’s senior instructors with thousands of flight hours, and every School of Aeronautics student is trained to handle all kinds of in-flight emergencies, including “dead stick” landings.

The School of Aeronautics has postponed further flights while their personnel cooperate with the investigation and to ensure that there are no safety concerns.