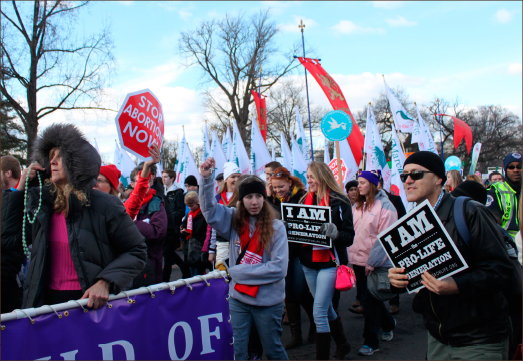 Thousands of pro-life supporters join the annual “March for Life” in D.C.

Stand — Liberty students joined crowds in petition against the destruction of human life on the anniversary of Roe v. Wade. Photo provided

“The March for Life is the most impressive display of people coming together,” senior government major and Concerned Woman for America (CWA) bus organizer Chelsea Andrews said. “It’s powerful.”

The march was held Jan. 22, the 42nd anniversary of the Supreme Court’s Roe V. Wade decision. According to a Liberty University News Service article, Liberty has been involved in the march since the 1980s. This year, law student and well-known pro-life supporter Sean Maguire was asked if Liberty students could help lead the march.

“It was crazy,” junior accounting major Rachel Brown said. “It was awesome, unlike anything I’ve ever experienced. I was part of something way bigger than me. It’s great to see other people on campus who are just as passionate about this issue.”

According to Andrews, there were around 200 Liberty students at the event. There was not enough room on the buses to hold everyone who turned out Thursday at 4 a.m. Some students drove separately and others were not able to go.

The march started after the rally of politicians, pastors and speakers at approximately 1 p.m. The march began at the National Mall on 12th Street and ended about two hours later in front of the United States Capitol Building, just past the U.S. Supreme Court Building.

The march was set to coincide with the Pain-Capable Unborn Child Protection Act up for vote, an abortion bill prohibiting most abortions after 20 weeks of pregnancy. However, according to Fox News, at the last minute, the bill was pulled and switched with the No Taxpayer Funding for Abortion and Abortion Insurance Full Disclosure Act, which passed.

“It was a step forward, but disappointing,” Caitlin Bassett, a sophomore government major and secretary of Lifeline, said.

This marks Bassett’s first time going to the march. Brown, who is also a member of Lifeline, marched for her third time this year.

Bassett believes that some politicians are more concerned about re-election than moral issues, but she said she will keep advocating, fighting and marching.

“I’m excited to see what will happen in the future with Liberty’s involvement,” Bassett said.

GLOSSNER is a feature reporter.