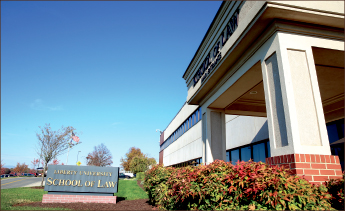 Liberty University’s School of Law has reached a new milestone — its 10-year anniversary. In the course of a decade, the law school has gone from a mere idea to a defining attribute of the university, with 205 students currently enrolled.

Mathew Staver, who became the dean for the law school in 2006, was the first person on site with the late Dr. Jerry Falwell in the planning and development stages. Staver befriended Falwell in the mid ‘90s and was involved with the School of Law many years before it was even built.

Law — Liberty overcame a decade of trials to get the law school where it is today. Photo credit: Courtney Russo

According to Staver, Liberty initially attempted to purchase a law school in Orlando, Florida, in 1998. Although those plans fell through, Falwell was still interested in having a law school run by Liberty. In October 2002 following a Liberty lawsuit against the state of Virginia in which the university acquired the land for Thomas Road Baptist Church, the idea of creating a law school was brought up at the Liberty University board meeting. The board approved the idea.

“Then (Falwell) asked me to be the dean, and I said I would rather bring someone else in to be the dean, but I wanted to be involved long-term,” Staver said. “So he added me to the Board of Trustees, and I became chairman of the Steering Committee of the Law School and introduced him to Bruce Green, the founding dean, and they hired him in October 2002.”

The building for the School of Law was formerly called the Erickson Building, and it belonged to a cellular telephone company in Europe that was planning to close the building in February 2003.

“(Falwell) wanted to put in a bid to buy this property,” Staver said. “If we had not won the litigation, Thomas Road would not be able to be on the same property. So the property restrictions are gone. A week later the board authorizes the law school, so the next thing we do is ask, ‘Where can we put the law school?’”

Liberty was unable to purchase the building, but Falwell met with David Green, president of Hobby Lobby, to convince him of the benefits of the School of Law. Hobby Lobby purchased the building and gave it to Liberty University in 2004.

Though the accreditation process was faster than usual for a law school, it was not without its challenges. According to Staver, a law school must undergo a full year of operation before they can even apply for accreditation.

Rena Lindevaldsen, who has been the associate dean for the School of Law for four years, said the first group of students and faculty took a big risk in joining the then unaccredited law school, as there was no guarantee that the school would become officially recognized.

“They didn’t know whether they’d gain accreditation,” Lindevaldsen said. “The founding faculty were working hard toward getting accreditation so (the students) could graduate and actually sit for a bar exam. Because if the school didn’t get accreditation, the students wouldn’t be able to practice anywhere in the country.”

Lindevaldsen said that although the first 18 months without accreditation were filled with uncertainty, the faculty was committed to the idea of building a law school on the foundation of scripture.

“We have to start with the Lord,” Lindevaldsen said. “Then there is the small, founding faculty, some of whom had worked at other law schools. They worked incredibly hard. Every single faculty member feels like they were called by God to be a part of this.”

Falwell had much enthusiasm for the law school, though he was never able to see it thrive. The School of Law had its first graduating class in May 19, 2007, four days after he died.

“Dr. Falwell was planning on being at that graduation,” Staver said. “He was prepared to have the graduation taped and recorded for future history. He loved the law school, and he talked about the law school everywhere he went around the country.”

Over the years, the School of Law has made tweaks to the program, including adding electives and expanding its clinics according to student and faculty feedback.

“The changes required us to evaluate new courses based on the interests of the students while seeking to maintain a rigorous program,” Lindevaldsen said. “We eventually expanded each of the different practice areas, and that’s slowly been done over the last eight years.”

Lindevaldsen said one present concern of the law school is that the American Bar Association (ABA) bar passage rates need to be improved.

“We have not fallen out of compliance with the bar passage rates, but our desire would be for everybody to pass the bar,” Lindevaldsen said. “The faculty recently had meetings, we’ve been consulting with bar experts around the country, and we are prepared within the next couple of weeks to make changes that will take place immediately next semester and begin what we call ‘bar preparation’ from day one of the law student’s career.”

Some of the proposed changes include monitoring the students’ success after their first year of law school, as Lindevaldsen said that a student’s first year is directly tied to success on the bar exam. They plan to give students exams that share a similar format with the bar exam.

“You don’t teach for the bar exam, but you can teach the kind of techniques it takes to answer the questions they want you to,” Lindevaldsen said.

Staver said he is very pleased that the law school has reached its 10th year.

“We have grown and had such an impact already on legal education,” Staver said. “I think our greatest achievement is to see our graduates walk into the world, and you remember where they were three years ago and to see to where they are now, and you also see how God is putting them in specific places that have a big impact around the world in every area of law.”

Janney is the asst. news editor.