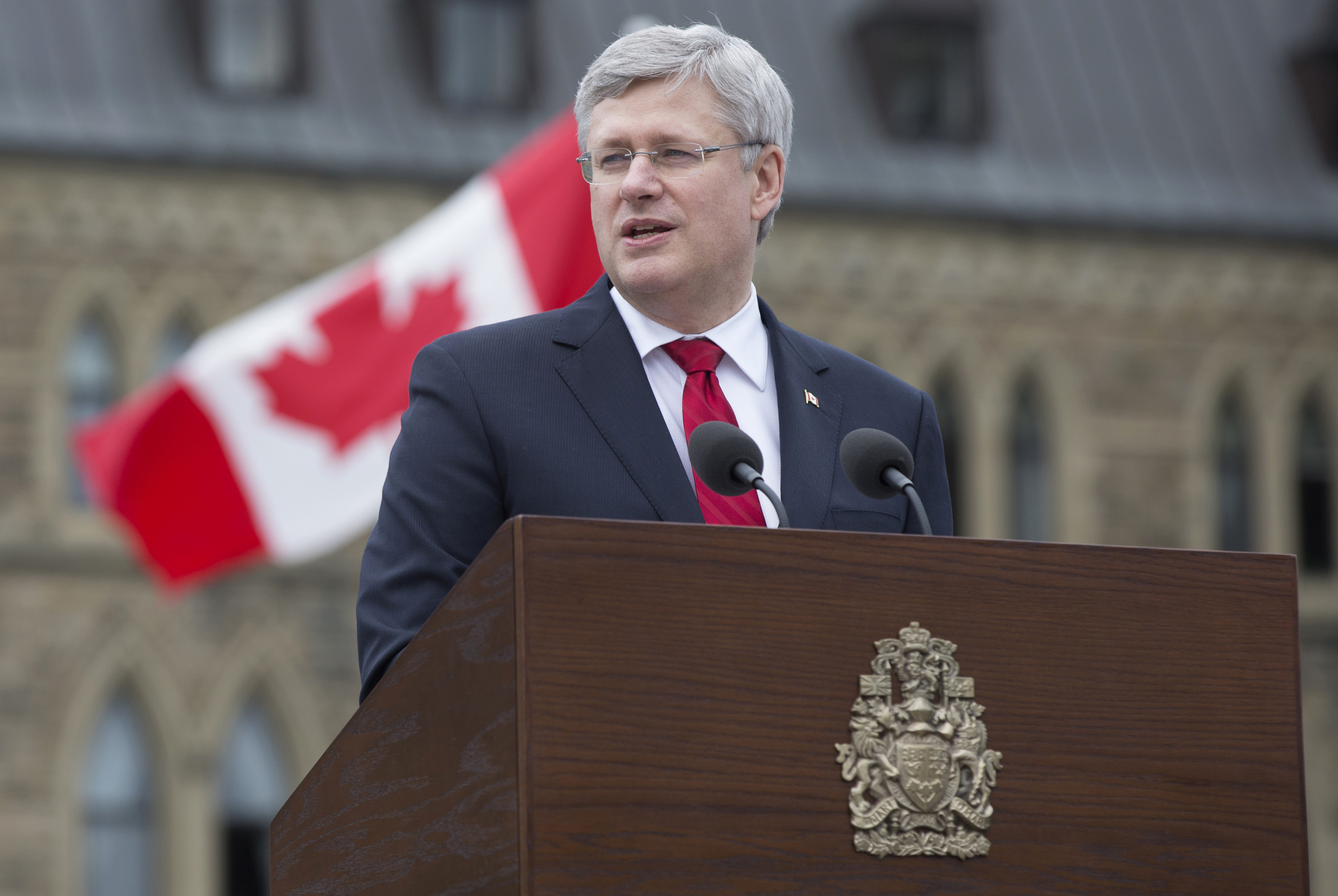 Terror struck Canada for the second time in one week as gunman Michael Zehaf-Bibeau killed a soldier standing guard at the National War Memorial in Ottawa Wednesday, Oct. 22. He then stormed the Parliament building, firing shots before being killed by Sergeant at Arms Kevin Vickers.

Members of the Conservative Party were holding their weekly caucus with Prime Minister Stephen Harper when the shooting started.

“I thought it was just some construction noise, because we always have construction going on in the Parliament buildings of some sort or another,” Member of Parliament (MP) and President of the Treasury Board of Canada Tony Clement said. “Then we heard very rapid-fire ‘rat-a-tat-tat’ sounds right outside the caucus doors. Clearly at that point, we all knew that this was an attack.”

With the sheer volume of gunfire just outside the door, Clement, Harper and the other MPs feared that many more than just one gunman were about to barge into the room. Then “things happened very quickly,” and the prime minister was secured.

“At that point, I was near the door along with several other MPs, and I made the decision that if people were trying to bust into where we were, it was best to be outside of that room,” Clement said. “A bunch of us went out the door, which happened to be where the firefight was taking place, but we scattered up a nearby set of stairs and barricaded ourselves in an open office for about four hours.”

Clement and the MPs who followed him had left their electronics behind, but their hideout included a TV and a desktop computer. They used the computer to keep up with the news on Twitter and interact with their followers.

“We wanted to know what was going on obviously, because we didn’t know how many (shooters there were) or whether we were still at risk, and none of that became clear until hours later,” Clement said.

He sent periodic tweets to let his nearly 44,000 followers know he was okay and answer occasional questions.

“That’s one of the great uses of the social media world — that you can have this direct contact and communicate a message, either personal or otherwise, instantaneously,” Clement said. “I think it was a good use of the medium at a time when there was confusion and, in some cases, panic.”

Liberty University alumna Shelanne Jennings of Huntsville, Ontario, — the same town as Clement — sent him a message of support and followed his tweets during the day.

“Even after the shooter was killed, I still feared for him,” Jennings said. “There could have been another shooter out there.”

Rather than fear, Clement tweeted that he chose to “put my faith in first responders and the Lord above.”

He said he had started the day studying the Bible with a number of other MPs, as they do every Wednesday morning.

“We have different political faiths but the same Christian faith,” Clement said. “That was how I started my day. … (Studying the Bible) helps give me strength, and it helps give me, I hope, a little bit more wisdom, so it’s part of who I am.”

When Parliament was safe, thoughts shifted to the soldier murdered at the War Memorial. Twenty-four-year-old Cpl. Nathan Cirillo of the Argyll and Sutherland Highlanders of Canada was standing guard at the Tomb of the Unknown Soldier when reports say Zehaf-Bibeau shot him in the back. Paramedics rushed Cirillo to the hospital, but were unable to save him.

Rebecca Noble, a Liberty alumna, met Cirillo in 2009 during her last year in the Royal Canadian Army Cadet Program. She took a Drill and Ceremonial course at Canadian Forces Base Borden, and Cirillo was her company quartermaster.

“Any time our platoon needed any form of military issued kit, he would be one of the two guys to make sure we had all we needed,” Noble said. 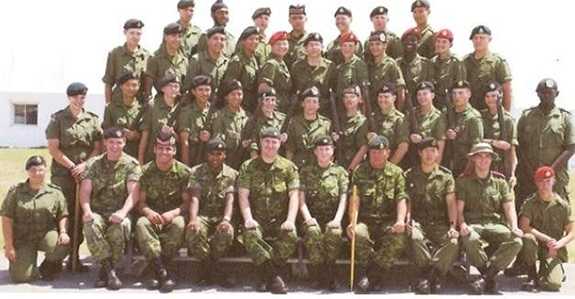 Company A — Cpl. Nathan Cirillo is seated in the front row, third from the left. Directly behind him is Liberty alumna Rebecca Noble. Photo provided

To Noble and the other cadets, Cirillo was “a co-worker and a mentor.”

“He is remembered as the life of the party, with a joke to tell and good advice to get you through the next day,” Noble said. “To me, he was a decent and kind person that was skillful in what he did and truly noble to his word. His laughter will be remembered by so many.”

Noble was having dinner at a Tim Horton’s in Cirillo’s hometown of Hamilton, Ontario, when Cirillo’s name was released as the soldier killed in the attack.

“I didn’t even need to read the article,” she said. “I just saw his picture, and my heart sank as I recognized a familiar face from five years ago.”

Cirillo’s body was driven home to Hamilton in a military motorcade Friday, Oct. 24 along a stretch of road known as the “Highway of Heroes” — so named for the many soldiers who have given their lives overseas and been brought home by that same route. Thousands lined the bridges along the way to pay their respects.

“I felt like it was a defining moment,” Jennings said. “My parents sat silently beside me as we heard people spontaneously break into ‘O Canada,’ and I felt tears stream down my face. This man who was defending a monument on Parliament Hill is now dead, and his little boy will never see him again. My heart broke.”

Cirillo left behind a young son, Marcus, who started kindergarten just last month. A photo on Cirillo’s Instagram page shows Marcus wearing his school uniform with a huge smile on his face. In his hands is a sign reading, “My first day in Senior Kindergarten,” with the name of the school and the date underneath. Cirillo captioned it, “Time to pick up them girls little man :)” 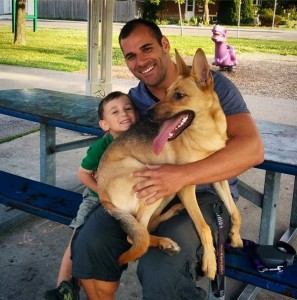 Hundreds of people have commented on the picture, expressing their heartfelt love and support for the little boy in the photo.

Canadians have banded together around this tragedy, and several people interviewed termed it a “wake-up call.” Liberty Flames men’s Division 1 hockey coach Kirk Handy said his team saw the news in the Raleigh-Durham airport on their way to a series of games in Arizona.

“We think stuff like this wouldn’t happen in Canada — that it’s more isolated down to different parts of the world — and it became very real to a lot of Canadians to see what transpired up there in the last week or so with these two incidents,” Handy said. “Our hope and our prayer is that Canadians understand that there is evil out there, and people who are trying to take away freedoms that others have worked very hard (to maintain) for so many years here.”

“I think this has made everyone realize that Canada is not necessarily a complete ‘safe zone’ and isn’t immune to many of these issues that we’ve heard reports about from America, but haven’t actually experienced before,” she said.

The country has already begun bolstering security around priority areas like government buildings, schools, subways and sporting arenas. Soldiers on leave have been asked not to wear their uniforms in public. Sandra Noble’s mother Hutoxi Noble described the increased police presence and security measures in Ottawa, but she remained confident.

“Canadians are a very strong and proud breed,” Hutoxi Noble said. “Stronger security will be a way of life, without encroaching on the values and freedoms that Canadians are so proud of.”

In his address to the Canadian people the night of the shooting, Harper embodied that same spirit, saying that Canadians “will not be intimidated.” 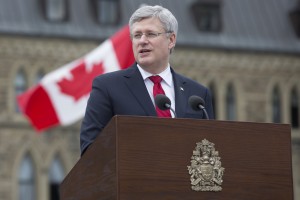 Canadians praised Harper’s response to the situation and his remarks on Wednesday. Jennings said she was “so proud” of her prime minister, and Handy called him a “great leader.”

“I think he showed leadership under great stress and strain,” Clement said. “People wanted to be assured that government was still around and in business, and he illustrated that very quickly. And I thought his remarks were very appropriate (Thursday) in the House of Commons. He said, ‘We’re not partisans here today — we’re all Canadians.’”