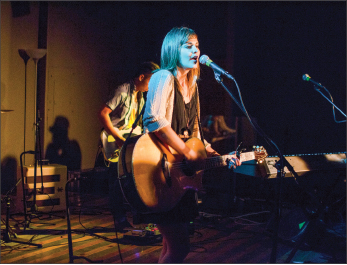 It is hard for Jane Marczewski to walk through the Liberty University campus without being recognized. For the Liberty alumna who graduated in 2013, these last moments in Lynchburg are more than simple hellos or a stroll through campus. They are goodbyes, as Marczewski packs her bags for Nashville, Tennessee, where she feels she can grow into a better artist.

“I was so against going,” Marczewski said. “I thought it was so cliché. I thought there had to be some other city. But when I (visited), I was so in love with the people and the culture. There is such a community for independent artists.”

Before leaving, the musician held a farewell concert at Canvas, an entertainment venue in Lynchburg, on Oct. 4, complete with free root beer floats and
cotton candy.

“The show was everything I wanted it to be,” Marczewski said.

More than 200 people attended Marczewski’s final concert in Lynchburg, and a portion of the proceeds went to Lynchburg’s Lighhouse Ministries, which helps support children in the downtown Lynchburg area.

“I grew up in a privileged home with a supportive family,” Marczewski said. “It was a safe place to grow. Some of those kids (who come to Lighthouse) don’t have that. They need someone to believe in them.”

Marczewski said the event raised more than $200 and some people donated extra as they headed out the door.

“I felt so much love and support from the crowd,” Marczewski said. “I believe they would have loved it (even) if we bombed. It was so special to be together in a room with so many who have been with me since I started.” However, when the Ohio native arrived in Lynchburg, she never planned to have a career in music.

“I graduated with a degree in advertising and public relations,” Marczewski said. “Music was one of those secret dreams you never say out loud because it’s not practical.”

It was not until halfway through her time at Liberty that her music career began to grow.

“I started having fun with it,” Marczewski said. “I started putting my songs online, doing shows, and everything just snowballed from there.”

Marczewski said it was a struggle when she realized that God was calling her to turn her love and passion for music into something more than a hobby, especially right after she had graduated with a degree in a field that was completely different than the one to which God was leading her.

“Growing up, I always did what was expected of me,” Marczewski said. “Doing something like this was so unlike me. But I really learned that God sometimes calls us not to live practical lives.”

Despite doing something very different than she originally planned, Marczewski said graduating with an advertising degree still helps her with her music.

“Everything I did for the farewell show, I learned through being a Public Relations major,” Marczewski said. “It’s why I created the #FarewellJane and marketed the event.”

Marczewski said she will miss Lynchburg, a place that makes her feel like everyone is rooting for her.

“Lynchburg is an amazing city,” Marczewski said. “It feels like all the creatives are on one side and really pushed me to be where I am today.”

Though Marczewski is headed to Nashville, she has another stop to make first.

“I’m heading home to Ohio first,” Marczewski said. “I get to spend some time with my family, write and just really process this whole Lynchburg thing.”

For more information about Marczewski and her music, visit her Facebook page or JaneMarczewski.com.

WALSH is a feature reporter.