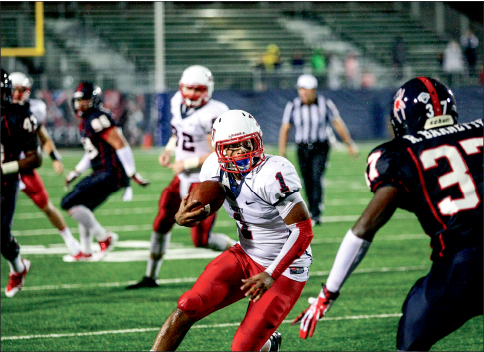 REDEMPTION — The Flames will be looking to avenge a road defeat at Richmond last season, where they lost 30-21. Photo credit: Ruth Bibby

This Saturday, Liberty Football Head Coach Turner Gill and the Flames will face off in a much-anticipated Homecoming matchup against the record-setting former Liberty Coach Danny Rocco and his Richmond Spiders.

Rocco was the head coach for the Liberty Flames football program from 2006 to 2011. He came in after a 1-10 season and quickly turned things around for the
football program.

“They were coming off such a bad season, 1-10 in 2005, so to be able to be that spark that helped generate and create more enthusiasm for football and ultimately success for football was great,” Rocco said. “I think I left that program in much better shape than it was (in) when I got there. I can remember Dr. Falwell saying (there were) more fans at the high school game than at the Liberty game during the interview process.”

While many people would call this game special, the players do not seem to think so, at least not for the same reasons.

“He wasn’t really my coach that long, so it doesn’t really mean anything to me,” Josh Woodrum, starting quarterback for the Flames, said. “Everyone on the team now was only with him for a max of a year and a half. I think people try to make a bigger deal about it than it actually is.”

While they may not be too excited about Rocco’s return, coaches and players alike are excited to show off the campus and the facilities to the players who came
before them.

“I’m pretty excited for the alumni to be able to see the university and how God has definitely worked here and changed the program,” Flames starting Along with the facilities, the Flames wish to show how far the program has progressed as well.

“As far as where (the football program is) going, I don’t think it has ever had a brighter future,” Woodrum said. “We are doing everything we can right now to make sure it just keeps climbing and getting better.”

Despite most of the staff having changed since Rocco’s days, two still remain, Marshall Roberts, the defensive backs coach, and Charlie Skalaski, III, director of player personnel/recruiting.

“It was great working for Rocco,” Roberts said. “I learned how to run an organization properly, how to expect great effort each and every day, and how to really identify every aspect of making sure your kid is prepared.”

Roberts had high praise for Rocco, but seeing him again is not what he is most excited about.

Not only is this a highly anticipated game for the reasons given above, but it is also a game between two very good football teams in the state of Virginia.

“I think it’s going to be critical for both teams,” Rocco said. “As for a nonconference game, I think this game is as critical as a game could be. Both teams are floating on the back end of the top 25, and we are trying to create resume builders for the postseason.”

Along with simply wanting to defeat Rocco, the Flames do not want to fall short on Homecoming.

“Richmond is a big game,” Woodrum said. “Everyone knows what that game sort of has around it. You never want to lose your Homecoming game.

Ironically, Gill was not the one who scheduled this matchup. It was Rocco himself. Not only was he responsible for the Liberty-Richmond matchup, he was also responsible for recruiting his opponent’s quarterback.

“I recruited Josh (Woodrum),” Rocco said. “We loved him. He was a huge get for us when we were putting that recruiting class together. I liked everything
about him.”

Rocco said that coaching for a long time provided him with the opportunity to experience many unique situations. But he also iterated the importance of separating things that are meaningful from preparing his team. He said none of these things have to do with his feelings or emotions toward the game.

“It’s going to be a very special night, and I think the reality for us coaches is you always have to be able to separate those things that are personal from those things that are specific to your team playing to win the game,” Rocco said. “And there’s no correlation between the two events. Our preparation will be as it always is.”

Abnar spoke for the entire team with his message to Richmond’s head coach.

The Flames will kick off Saturday, Oct. 4 at 7 p.m. at Williams Stadium.

SCHMIEG is a sports reporter