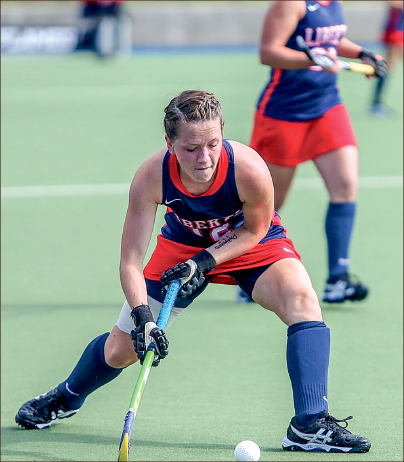 Liberty got off to a bit of a slow start in the first period against Ohio before exploding in the second period with 17 shot attempts and four goals. Sunday’s game saw a stark contrast, with all of the game’s goals being scored within the first 20 minutes.

Four games into their current six-game homestand, the Lady Flames are undefeated and have showed stability on both sides of the ball. The Lady Flames have been impressive on offense, outscoring their opponents 16-3 during that stretch.

Lady Flames junior forward Sarah Gipe is continuing to have quite a season, scoring in five of the last six games, including one against the Bobcats. Gipe currently leads the team with six goals and 14 points, but she was quick to credit the work of her teammates.

“I like the fact that I contribute to the team in this way,” Gipe said. “The other team definitely had my number right away. I scored a goal, but we had four others that scored, too.”

Despite Gipes’s contributions, the offensive success of the team is not all coming from one place. Liberty has had 12 different goal scorers this season.

“We have a lot of girls that are playing good hockey right now, and we’re sharing the ball well,” Murphy said. “We’re passing the ball, moving the ball around. We’re not relying on just one player.”

Liberty midfielder Rachel Suter was able to contribute to Friday’s win as well, scoring the third goal of the game in the second period. It was the freshman’s second goal of the season, but her first on home turf. Hannah Goldsborough, Serena and Bethany Barr also knocked in goals during Friday’s shutout performance, while Goldsborough and Ashlee Krulock did the scoring against the Cardinals.

The Lady Flames defensive presence has been a key factor to their success as of late, giving up only three goals in the last four games. The Cardinals sent a flurry of shots at Flames junior goalkeeper Mallory Cuccio, but she responded by saving eight of the nine shots put on goal.

“It’s been neat to see the defensive structure has been maintained and our defense is really not allowing a lot of attacking opportunities with only two shots on goal against us (Friday),” Murphy said.

The Lady Flames leave the weekend with momentum, ahead of a torrid mid-October stretch in which they face three of the nation’s top 10 teams in the University of Virginia, Duke and UNC. But after defeating 12th-ranked Wake Forest Sept. 19, the Lady Flames are confident that they can compete with the best.

“I think having won the Wake Forest game last weekend really did help us,” Murphy said. “Knowing that we can play at this level and win at this level is really encouraging.”

Longwood and Appalachian State will journey to Liberty today and Oct. 5 as the Lady Flames conclude their homestand.

CARTER is a sports reporter.