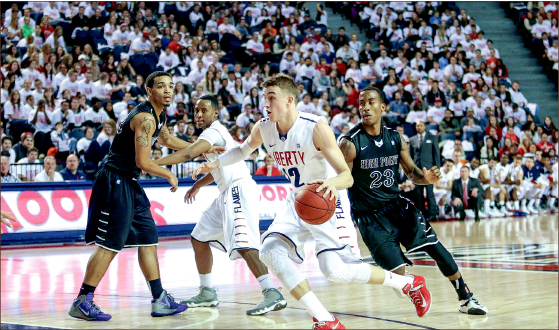 During this past summer, while the rest of the Flames were preparing for the upcoming season, two Liberty Flames basketball players were back in their native countries, preparing for one of Europe’s largest tournaments.

EuroBasket 2015 plays host to some of the best European national basketball teams, and senior Tomasz Gielo and freshman Peter Moller were both a part of it.

Gielo, a Poland native, represented his country during this summer with the Polish National team. According to fibaeurope.com, Poland led the tournament in points and finished second in assists, and won five out of its six games, automatically qualifying them for the 2015 EuroBasket Tournament next summer.

According to Gielo, the Poland national team was stacked with talent across the board, including the 7-foot center, Przemek Karnowski.

“It was just an amazing experience,” Gielo said. “All of the guys were pros. There is also one more guy that plays in college for Gonzaga University, Karnowski, and he’s a really good player too.”

Gielo also said that this was his first time making the final roster for this team. He played in every game except for the last one against Austria. His best showing was against the Luxembourg national team, when he scored 13 points and brought down five rebounds. He averaged 3.6 points per game and two rebounds during the qualifying rounds.

Moller also had the opportunity to represent his home nation, Denmark, on the basketball court. In his four games, he averaged two points and 0.5 rebounds.
“It was a great, great experience,” Moller said. “I was so happy that I could finally play for my nation. In my last game with them, it was on home court and it was so nice to represent (my) country.”

Gielo also said he was honored to represent his country while doing something he loves.

“It’s a great honor,” Gielo said. “I don’t think there’s a bigger blessing than playing for your country. All of the fans are out there supporting you. You know you play for your country when they play the national anthem before the game. It’s a great feeling that really gets you going for the game. You really can’t take it
for granted.”

The Poland native has been more than a Liberty teammate to Moller. He has been somewhat of a mentor to the freshman guard. They both left their native lands to attend Liberty, and because Gielo knows exactly what Moller is experiencing, the two were able to connect on a more personal level.

“He helped me with the recruiting process,” Moller said. “He was really nice to talk to me and to tell me what it is like to be a European at Liberty.”

Both athletes said that playing basketball this past offseason has proven to be beneficial for preparation in the upcoming season, and Head Coach Dale Layer
has noticed.

Layer is also proud to have two athletes on his team that represented their countries and school on a global scale.

“It’s an unbelievable opportunity for these guys to do something that every kid grows up dreaming of — representing their respective country,” Layer said.

HAYWOOD is the asst. sports editor