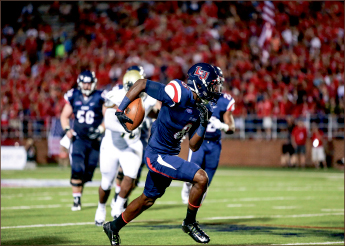 FIRED UP — The Flames improved their record against FCS top-25 teams to 3-5 since Turner Gill has taken over. Photo credit: Courtney Russo

The Liberty Flames football team (3-1) dominated the No. 25 Football Championship Subdivision team in the nation in the NCAA coaches poll, the Bryant University Bulldogs (3-1) 38-21 at Williams Stadium Saturday, Sept. 20.

On the first possession of the game, with only a few seconds until the 13-minute mark in the first quarter, safety Jacob Hagen jumped the route of a Bryant receiver and intercepted the pass from quarterback Dalton Easton, placing him fifth on Liberty’s all-time interception list. Hagen said he recognized the play from the start, due to film study, and actually expected the ball.

The Flames eventually hit the scoreboard first, and they did it in record-breaking fashion. With 7:50 to go in the first quarter, kicker John Lunsford lined up for a 52-yard field goal attempt. Thanks to a delay-of-game penalty, 52 yards became an improbable 57 yards. Despite the distance, Head Coach Turner Gill kept punter Trey Turner on the sideline and sent out Lunsford again for the attempt. “There was a little bit of hesitation, in particular after we got the delay (of game),” Gill said. “But I knew he had the leg.”

When the ball went up, the hands of the officials soon followed, indicating that the junior kicker had just made program and conference history. Lunsford broke the 0-0 tie, along with the 30-year-old program record for longest field goal in a game (53 yards).

“It was probably one of the greatest feelings I’ve had,” Lunsford said. “I’ve had trouble hitting 55s, kind of just with my accuracy, not really length. And I really just give all the glory to (God). I don’t want to give you the typical Christian answer, but that’s really it, because I know I couldn’t have made that on my own.”

The Flames defense rode this newly acquired momentum from Lunsford’s kick as they forced another one of Bryant’s five punts on the night.

Liberty quarterback Josh Woodrum took the field with a 3-0 lead and began to quickly take his offense down the field. After tight end Dexter Herman made a difficult one-handed grab for 23 yards, redshirt freshman Todd Macon maneuvered his way through defending Bulldogs for a 21-yard gain, putting the Flames in the With just under three minutes left in the quarter, Lunsford scampered in for his third rushing touchdown of the season, and the first touchdown of the game.

After shutting down the Bryant offense once again, the Flames received the ball back right before the second quarter. The offense moved down the field and made it all the way to the two yard line when D.J. Abnar capped off the three-minute, 66-yard drive as he powered his way through for a three-yard touchdown, giving the Flames the early 17-0 lead.

After Lunsford missed a 35-yard field goal in the second quarter, it appeared that the Flames had cooled down. Liberty’s defense had already held the Bulldogs to 31 first-quarter yards while Gill’s offense amassed more than 150. But there appeared to be no cool-down when the Flames defense forced another stop.

The offense took the field and Woodrum made a big-time play to put Liberty in scoring position. After avoiding pressure from Bryant’s front four, including breaking a tackle, the junior quarterback hit a streaking Dante Shells for a 43-yard completion. This play set up Abnar for a 23-yard touchdown, his second on the night, giving the Flames a commanding 24-0 lead.

Despite the deficit, the Bulldogs bit back. After the Abnar touchdown, Bryant running back Ricardo McCray returned the ensuing kick for 63 yards, giving Bryant excellent field position.

Minutes later, McCray found himself wide open in the back of the end zone, catching a pass from Easton and giving Bryant its first points.

Special teams continued to be an issue for the Flames when they dropped the kickoff and watched it roll out of bounds at the six yard line. After a quick three-and-out for the Flames, Gill sent out the punting unit. However, Liberty fumbled the ball before Turner could even kick it, giving the Bulldogs the ball deep in Liberty territory. Two plays later, McCray scored his second touchdown of the night. In a matter of three minutes, the Bulldogs scored 14 points and cut the deficit to 10 points right before halftime.

“We hurt ourselves,” Gill said. “It was more about what we didn’t get done than what they did against us.”

The Flames defense responded to the resurgence of the Bulldogs offense with a stop early in the third quarter. Liberty’s offense jumped back on track when Woodrum passed for his first touchdown of the night, hitting Thomas Kennedy for a four-yard touchdown pass and putting the lead back to 17. This was the only score for either team in the third.

Early in the fourth quarter, Woodrum bolted to the end zone for a 30-yard rushing touchdown, the longest of his collegiate career. Bryant scored one more time with four minutes left in the game, which ended all scoring, leaving the final score as 38-21 Liberty.

Woodrum and wide receiver Darrin Peterson were the top performers for the Flames offense. Woodrum finished with another 300-plus-passing-yard game along with two rushing touchdowns. Peterson finished with his sixth career 100-plus-receiving-yard game with 118 yards.

“(Peterson) has been playing great lately,” Woodrum said after the game. “I’m sure he had over 100 receiving yards tonight, and I expect that from him.”

The Flames are now on a three-game winning streak and look to extend it next Saturday, Sept. 27 at 3 p.m. against the Indiana State Sycamores (2-1) at Memorial Stadium in TerreHaute, Indiana.

HAYWOOD is the asst. sports editor