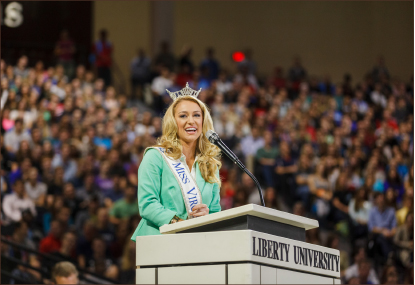 After months of preparation, Courtney Paige Garrett, a 2014 graduate of Liberty University and Miss Virginia 2014, heard her name called after every cut, from 53 to 16, 12, 10 and 5, and finally took the first runner-up spot in the Miss America pageant Sunday, Sept. 14.

“I watched Miss America growing up since I was a little, little girl,” Garrett said. “I admired (the contestants) as women. They were my role models. I dreamed of being on that stage, and for it to finally happen was a culmination of years of dreaming and years of hard work. … (It was) absolutely surreal, a dream come true, and a huge blessing. … I still haven’t fathomed that it really happened. I mean, thousands and thousands of girls have dreamed of being there, and to have all this hard work pay off and for God to allow me to get first runner-up, it was just a culmination of so many things, just overwhelming joy and gratitude and excitement.”

During the course of her Miss Virginia and Miss America competitions, Garrett amassed $65,000 in scholarships and is now debt-free following her time at Liberty.

For two weeks, Garrett, along with 52 other women from each state, the Virgin Islands, Washington, D.C. and Puerto Rico, competed in preliminary rounds, including the interview, lifestyle and fitness, talent and evening gown portions, to determine a top 16.

Those top 16 then participated in the final rounds Sept. 14 in the competition that was nationally televised by ABC.

Garrett explained that one of the most important aspects of the competition to her was the interview portion in the preliminary rounds. According to Garrett, each contestant fielded questions from seven judges for approximately 10 minutes.

“(T)ypically that is the part that’s most important to me, that I feel is my strongest point, but I get most nervous about,” Garrett said. “This was a much different experience for me. I was the calmest I’d ever felt. I had done all I could do to prepare and I just felt God’s peace to just be who I was, to be bold in that, and to trust that His will would be done.”

Garrett said she faced a number of tough questions because of her background and faith.

“I walk into an interview room and always have to break down stereotypes and almost defend my choices because of coming to Liberty,” Garrett said. “But I’m very proud of that, and it’s opened a lot of … (opportunities) for me to hopefully shed positive light on what Liberty provides. … I use it as an educational moment to say, ‘We sign up for this, and this environment is conducive to our faith and to becoming solid Christians and learning how to profess our faith, and developing
our worldview.’”

During the nationally televised portion of the Miss America pageant, when Garrett made it to the top five, she faced a question about ISIS and what America’s response should be.

“My thoughts were, ‘I just want to be Miss America, I can’t solve all the world’s problems in 20 seconds,’ you know?” Garrett said. “Thankfully I had (answered) a very similar question in interviews, … so I kind of had an idea of what to say.”

Garrett said that, while the interview was most important part in her mind, being able to sing opera during the talent portion was the highlight of the competition. According to Garrett, in January of this year, she found out she had a benign vocal cyst and had surgery to remove it in March.

“I never knew if I’d ever be able to sing to my potential again, and so being able to perform my talent, and the ability that God gave me to perform it in the way that I did, was probably one of the most humbling moments,” Garrett said. “That was so exciting, because that was a blessing that God didn’t have to give me, but he did, and I was so grateful for that.”

Dr. John Hugo, chair of the Department of Music and Humanities, said he was extremely impressed by Garrett’s performance in the Miss
America pageant.

“During her undergraduate study, Courtney was outstanding in the classroom and on the stage, but she impressed most with her genuineness,” Hugo said. “She is the real deal. The young lady you saw at the pageant is the real Courtney, and she represents her (God), her alma mater and (Virginia) extremely well. Everything about her performance at the pageant was exemplary.”

Now that the Miss America competition is over, Garrett said she will continue to make appearances as Miss Virginia for an entire year, emphasizing the “Defying Disabilities” campaign she chose to be her platform throughout all of her recent pageants. Garrett’s campaign was inspired by her brother, Austin, who has cerebral palsy.

“I feel that it is a calling on my life to be a voice for not only him but the entire disabled community,” Garrett said during her Convocation address to Liberty students Sept. 17. “Being Miss Virginia allotted me the opportunity to bring that story, and the stories of so many others, to a national platform. And that’s something that I think God will continue to use to bring that voice across that nation and throughout the world, advocating for their rights, advocating for
their respect.”

In the future, Garrett plans to start a nonprofit organization named “CARE,” which stands for Communication and Respect for Everyone, that promotes awareness for disabled individuals.

More information about the future organization can be found on the Facebook page “CARE – Communication and Respect for Everyone.”

BROWN is the editor-in-chief