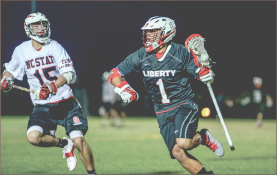 Liberty defeated both N.C. State and Auburn this weekend to improve to 9-3

LU 9, N.C. State 7
Early in the fourth quarter with rain drenching the turf, midfielder Miguel Lozada picked up a ground ball and charged the left side of the field. After maneuvering through the Wolfpack defense, he launched a shot into the back of the net, bringing 4,000 fans two their feet.

“I just wanted to step up,” Lozada said. “I’m one of the seniors on this team, and I wanted to rally the troops a bit. My goal wouldn’t have happened if I didn’t receive the picks from Kurt (Tobias) and Ryan (Miller).” In the first quarter, the Flames jumped out to an early 4-0 lead. However, the Wolfpack stormed back and tied the game at four.

At halftime, the game remained tied, but N.C. State exited the first half on a wave of momentum.

“Once we got the lead, we got a little lax,” Lozada said. “We started to make mistakes and (N.C. State) started to capitalize on our mistakes.”

The steady rain did not help either, forcing the Flames to commit several unforced turnovers and placing the defense in bad situations.

“The weather did not help, especially when it came to picking up ground balls,” Lozada said. “The ball was slick, and it was also difficult to maneuver with our sticks.”

N.C. State continued to place pressure on the Flames but was unable to gain a lead.

Yet again, the Flames got out to a quick start, scoring five consecutive goals in the first quarter. By the end of the second quarter, Liberty added six more goals to go into halftime with an 11-1 lead.

In the first half, the Flames stayed aggressive and outshot the Tigers 26-11.

At the beginning of the third quarter, Liberty continued to add to their lead by taking advantage of the Tigers mistakes. Although they were limited to only four shots on goal, the Flames converted on three of their opportunities.

Auburn was limited to 25 shots on goal for the entire game. Kamholtz had 14 saves, and Miller and midfielder Chad Moore had three goals each. Tobias, attacker Stephen DiPaola and midfielder Derek Haywood had two goals each.

The Flames have not lost a home game since falling to the Richmond Spiders April 15, 2012.