Taking the gospel to the people of Haiti 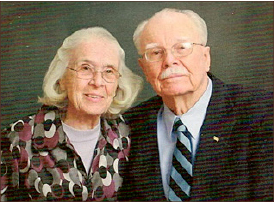 Whether serving in Haiti or Lynchburg, missionaries Wallace and Eleanor Turnbull have worked to leave a lasting legacy of love for Jesus Christ with those they meet. The Turnbulls have served as missionaries in Haiti since 1946 and founded Baptist Haiti Mission (BHM) in 1948. Wallace Turnbull said that while they worked in Haiti, his wife was involved with mission affairs in the capital, including working with Government Ministries and custom importations. He worked in a variety of fields as he taught students, traveled to various congregations and built churches and post-disaster housing for those in need.

Though their ministry had humble beginnings, Wallace Turnbull said God used them to impact the people in Haiti in a powerful way.

“Jesus said to go make disciples,” Wallace Turnbull said. “We did, and he (made) his message explode. It affected much of the country in many ways.”

According to the BHM website, this mission has aided in the establishment of more than 350 churches and 354 schools and assisted with various humanitarian projects.

In March, the Turnbulls were honored by Haiti President Michel Martelly for their service to the country during a ceremony in the national palace.

According to an article on the BHM website, the president thanked Wallace Turnbull and his wife for their service through various outreaches of BHM and presented him with a cross of Haiti’s high honor.

Approximately 60 people, including pastors from the national church association and foreign officials, attended the televised event. Wallace Turnbull had the opportunity to speak for a few minutes and gave God the glory for all that was accomplished.

“It is not me,” Wallace Turnbull said to those in attendance. “It is the Lord, through the wonderful Haitian people. You are in my heart.”

In addition to their work in Haiti, Wallace Turnbull and his wife are also involved with the Liberty University community. The late Dr. Jerry Falwell, Sr. visited them when he was 20 years old, and later, their son David attended Liberty. David Turnbull died shortly after graduation, and dorm 19 was named in his honor.

Wallace Turnbull and his wife currently reside in Lynchburg, where they stay for a portion of the year to assist Haitian students attending Liberty.

Each year, up to two Haitian students are offered scholarships through Liberty and the Turnbull family foundation to cover the cost of classes, room and board. According to Wallace Turnbull, churches in Haiti choose students they believe will become leaders in their country to receive scholarships. The Turnbulls assist with other costs and help the students feel welcome while they attend Liberty.

“We keep contact here and seek to help them to feel embraced,” Wallace Turnbull said.

After graduating, these students will return to Haiti and use the skills and knowledge they learned to help people in their home country.

“I pray every day that the Lord will bless all of you at Liberty University, keep the school united … and fill the young folks from (numerous) countries with good things to take home,” Wallace Turnbull said.

When given the opportunity to share his story with young people, Wallace Turnbull said he emphasizes the importance of surrendering to God and following his plan.

“Give your mind and your heart to the Lord Jesus, and when an idea of something to do comes, it’ll be his idea,” Wallace Turnbull said. “We live a short time, and he has a wonderful road planned for us if we give ourselves to him.”