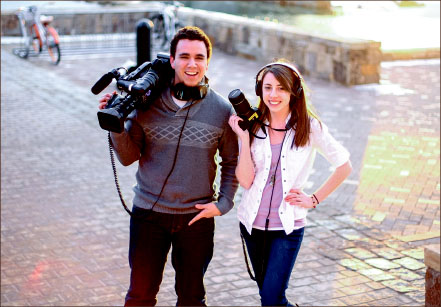 SHOOT — Both Farnsworth and O’Dell have the chance to work with Sony’s newest equipment. Photo credit: Leah Stauffer

Farnsworth and O’ Dell will receive an all-expense paid trip to Las Vegas, will have the opportunity to receive training on the latest Sony equipment and will “work the convention floor” at the Sony booth during the NAB conference, according to Miller.

Farnsworth and O’Dell both described themselves as “freaking out” when they were first notified about their selection for the event. Farnsworth said he had no idea he was going to be selected. O’Dell said she was “thrown off at first,” and the opportunity came from “out of the blue.”

“I’m really excited to be learning all of Sony’s new equipment,” Farnsworth said. “I love working with cameras — it’s my favorite thing to do.”

“Out of all the schools in the country, there (are) only 17 schools that get to have representatives,” O’Dell said. “The fact that Liberty’s on there is huge.”

Farnsworth said he and O’Dell will be trained on Sony equipment for two days, then present the equipment to broadcasting station representatives such as FOX News, CNN and ESPN.
According to Miller, “everybody that’s anybody” in broadcasting and filmmaking is going to be at the conference.

O’Dell said she is looking forward to seeing what other schools are doing in broadcasting and meeting new people who share her passion for video.

“I know that I wouldn’t be going to NAB on my own… Now that the opportunity’s being thrown at me, I feel like I need to dive in,” O’Dell said.

Miller said the Sony Student Experience broadens the horizon for students, and she hopes the event adds opportunity to their lives. Miller also said Sony invests in the students, providing them real-world application of their knowledge.

“Sony was really happy with the two students from last year, and I know they are going to be thrilled with the students from this year,” Miller said.

Both Farnsworth and O’Dell said they are excited to go.

“It’s really cool for us students to go, because we get all this hands on experience,” Farnsworth said.

Farnsworth and O’Dell currently work at the Liberty Flames Sports Network. Farnsworth is a student director and O’Dell is a technical director.

The Sony Student Experience began in 1989 with the relationship between Sony and Baylor University, according to Sony’s education blog.