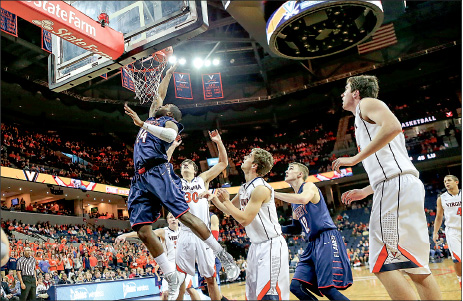 Paint presence — Antwan Burrus tips in a missed shot late in the second half against Virginia. Photo credit: Ruth Bibby

Burrus, who averaged 13.5 points, 5.8 rebounds per game and shot 53 percent from the field during the tournament, was named to the All-Tournament Team.

In Liberty’s first game of the challenge, the Cavaliers showed why they were ranked No. 2 in the nation in scoring defense, allowing only 50.4 points per game. In the first half, Virginia forced 10 Liberty turnovers, but the Flames went into halftime down only 32-26. “If you watch college basketball, whenever you’re expected to win handily, you can’t,” Virginia Head Coach Tony Bennett said. “On paper, we were supposed to beat them, but all you have to do is look.”

Guard Davon Marshall kept Liberty close throughout the first half, scoring 11 of his 15 points in the first half off of 3-5 shooting from three.

“They did a good job finding me more,” Marshall said. “They kinda ran me off the three point line. They also switched defenders a couple of times.”

Virginia came into the game struggling to score from beyond the arc, but forward Justin Anderson knocked down two threes in the first half, which sparked the Cavaliers offense.

“We solved their problems I guess,” Liberty Head Coach Dale Layer said. “We mixed it up (defensively). I thought in the first half, we got them on their heels a bit. In the second half, they went into a smaller lineup that could shoot the ball better. I thought Anderson’s threes in the first (half) were the difference in us being right there at halftime.”

The Cavaliers began to widen the gap in the second half, forcing nine more turnovers and holding the Flames to 34.8 percent shooting from the field.

“They are a very good defensive team,” Layer said. “I thought we tried to jam it in (the post) a little bit too much in the second half. In the first half we did ok, but in the second half, we got out of character.”

In the second game, the Flames faced Missouri State, losing in the waning seconds after Marshall missed a three as time expired. Marshall and Burrus were the only Flames in double figures, combining for 27 points.

Liberty earned its first win of the tournament against Hampton University Friday, Nov. 29, defeating the Pirates, 70-53, after shooting 60 percent from the field in the second half.

Burrus recorded his first double-double of the season with 17 points and tied his career high in rebounds with 13. Sanders complemented Burrus, with 15 points off of 6-9 shooting from the field. He also pulled down five rebounds and had seven assits.

The Flames will host Greensboro College Saturday, Dec. 7 at 7 p.m.