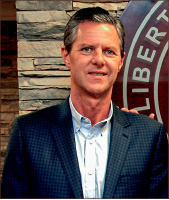 Just 48 hours before the 2012 Commencement, President Jerry Falwell, Jr. experienced symptoms of what he later found out to be a Transient Ischemic Attack (TIA) — a miniature stroke.

“There was numbness in my hand, my face started to droop, and Becki noticed that I was drooling,” Falwell said. “I told her I didn’t have any feeling in my hand, and I could barely speak. It only lasted a couple of minutes, but it was very strange.”

Falwell was then rushed to the hospital where he stayed overnight as doctors ran tests to determine what was happening. What he originally thought was a symptom of his occasional migraines turned out to be TIA.

“I initially didn’t tell my family, and the interview with WSET on Nov. 7 was the first time that I talked about it publicly,” Falwell said. “Lots of people my age contacted me after seeing the WSET interview and told me their similar stories, but most of them have had the bigger stroke that usually follows the ministroke.” Before and After – Falwell lost 75 pounds

Falwell said he was “blessed by God” that he was able to catch the symptoms in time and turn his habits around into a healthier lifestyle before they became deadly.

“The doctors said that if I could keep my blood pressure low for six to eight months and leave it there, the blood vessels that were damaged would grow back,” Falwell said.

Although Falwell’s stroke did not originally initiate the weight loss, not having to worry about any surprise health problems is definitely a benefit to losing the weight, Falwell said.

“I had been on blood pressure medication for 15 years, and the doctor wanted to put me on cholesterol medicine as well, but I declined that,” Falwell said. “Instead, I started changing my eating habits, and I progressively lost the weight.”

Falwell, who is now medication-free, turned 50 last year, and at that point, he said he began to care more about his weight and personal health.

The first month of his new weight loss plan, Falwell cut out sweet tea, soft drinks and any other kind of sweet drinks, he said. The second month, he cut out burgers, and during the third month, he started eating fruit to go along with his chicken sandwich. Over a span of 18 months, Falwell dropped from 240 to 165 pounds, total of 75 pounds in weight loss. “I was able to cut out everything, but I did it slowly,” Falwell said. “You can’t cut it out all at once or it’ll be a shock, and you won’t stick with it. Once I cut it out, I never missed any of it.”

Now, Falwell said he only drinks black coffee, water and homemade protein shakes that he prepares himself. The protein shake, thanks to the recommendation of Ben Crosswhite of Crosswhite Fitness, is made with spinach, almond butter, almond milk, kale, raw egg, protein powder, olive oil, chia seeds, oat bran and fresh fruit. Before and after – Bullman lost 180 pounds

“I work out two hours a week at Crosswhite Fitness with Becki, and because I kept up with Crosswhite, I was able to lose all that weight, and I’m able to keep it off easily,” Falwell said.

When the family eats at home, Falwell said their dinner plates are normally filled with grilled chicken or fish and vegetables.

Since his healthy change, Falwell said he has run a 5K in 30 minutes and hiked Sharp Top with ease.

In fact, other Liberty administration members have followed in Falwell’s footsteps. Liberty’s Chief Financial Officer Don Moon has lost 50 pounds, while Liberty’s Director of Ministry Teams Scott Bullman has shed 180 pounds, according to a WSET broadcast from Nov. 7.

For Bullman, the inspiration to lose the weight and get himself on a healthy track was spiritual.

“I’ve been morbidly obese for most of my life and have lost a lot of weight during that time,” Bullman said. “Feeling better, looking better, being around for my kids is always a good motivation, and this time around is no exception.”

However, according to Bullman, he believes God had been dealing with him regarding his influence.

“With leadership comes influence, and with influence comes the responsibility to (use) that influence for the glory of God,” Bullman said. “I finally realized that my influence would never be all it could be until I conquered this weakness, which was on display for everyone to see. Therefore, I gave it to God, hired trainer Ben Crosswhite, and committed 100 percent. Fifteen months later, I’m down 182 pounds.”

To date, the staff from Liberty has lost a combined 1,500 pounds—and that number continues to increase as each member continues on their path to health, according to Falwell.