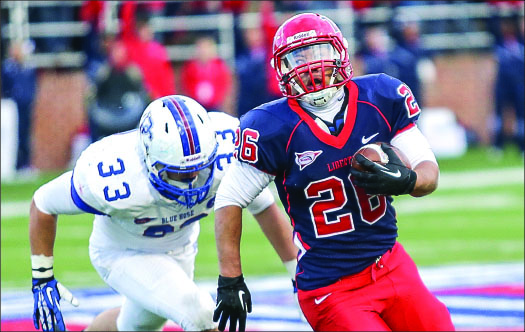 RUNNING DOWN A DREAM — Rice has run for a team-leading 12 touchdowns and 881 yards this season. Photo credit: Ruth Bibby

It is 68 degrees on a Saturday night in the first days of fall. A cool breeze wisps in and out of the concrete valley joined together by freshly branded green turf. At the center, “LU” is painted on the grass outlined in white and navy, perfectly positioned at the center of the 50-yard line. Three swift steps are all it takes for Flames football player junior Desmond Rice to run across the school’s new logo as he heads for the end zone, making the score 31-7 against Kentucky Wesleyan University.

Out of the 100 players on the Liberty Flames football team, a handful of athletes are from Lynchburg, Va. Of that batch, five players attended and played football at Liberty Christian Academy (LCA), which was also founded by Dr. Jerry Falwell. According to Rice, this is where he fell in love with the game of football, and he attributes all he has learned to his high school coach, Frank Rocco.

“Without him, I don’t think I would be the type of man or football player I am today,” Rice said. “He instilled in me the value of hard work at a time when I was not a hardworking person.”

At 5 feet 8 inches tall, Rice is shorter on the scale of running backs, but he utilizes his size to weave through his competitors in pursuit of the end zone.

So far this season, Rice has scored a total of 78 points. A quick look at his stats from last year will show how becoming a starter has improved his performance since last season. While he played in 10 games, Rice gained 44 yards on 11 carries, and he also caught eight balls for 109 yards and a touchdown.

“I get a chance to prove myself on a regular basis,” Rice said. “I feel like my coaches and teammates trust me, because I am now in the starting position.”

In previous seasons, he has been second string to upperclassmen. But Rice said he never let that bring him down. His recently earned starting position has been years in the making.
“Coach Rocco used to always say to me, ‘Good, better, best. Never let it rest. Until your good is your better and your better is your best.’”

Though the quote is from an old nursery rhyme, there is undeniable confidence in his voice when he says it, showing his desire to exhibit its message.

According to Seth Good, Rice’s friend of 10 years who also played football, basketball and baseball with Rice at LCA, Rice has made big strides in his football career.

“It’s awesome,” Good said. “I’m glad to see a good friend of mine do well. His work ethic has definitely improved. He does his research and has become a smarter player on the field.”

The Flames football player now gets to perform for a crowd of thousands of fans at the collegiate level. He continues to have hometown support from fans that watched him play years before he donned the Liberty Flames uniform.

“It lets me know that people appreciate the hard work I put in to get to where I am today,” Rice said. “They support me not only as a football player, but as a man growing up, and that motivates me to be successful.”

Rice said he does not take his fans for granted. Following every game, he can be found lingering on the field to allow time for those who attended the game to offer congratulations and take pictures.