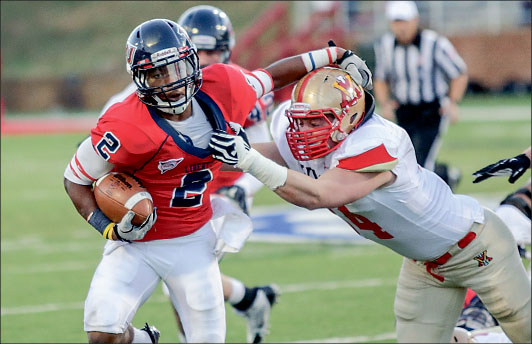 In the 13th meeting between the fellow commonwealth teams, the Keydets snatched a second straight shutout from the Flames by scoring a touchdown in the last two minutes of the game. The Flames would have posted back-to-back shutouts for the first time in Liberty football history.

“I’m more mad about this win than maybe some of the losses I’ve had in my career,” linebacker Nick Sigmon said. “So I think when you’re getting mad about wins, you’re really taking a step in the right direction, because you’re trying to demand perfection of yourself and your team. And to have something like that happen, it hurts, but at the same time, it’s a win, and we gotta enjoy it.”

However, despite the last-minute score by VMI, Liberty’s stingy defense was key in the Flames win. Although the Keydets only trailed the Flames by approximately six minutes in time of possession, Liberty allowed the Keydets to gain only 204 total yards of offense with 58 of those yards coming in their final touchdown drive. Liberty also limited aggressive 230-pound Keydets running back Derrick Ziglar to 58 rushing yards.

“(Ziglar) has such great balance,” Sigmon said. “I compare him almost to (Liberty running back Desmond) Rice, maybe a little less moves, but add 40 pounds onto him, and (you’re) talking about a heavy guy that has great balance and (is) hard to bring down.”

On the offensive side of the ball, the Flames sputtered in the first half.

On their second drive of the game, the Flames marched down to the VMI 22-yard line. On third down, Woodrum’s pass into the end zone to wide receiver Gabe Henderson was batted down, forcing Liberty to go for a field goal. Kicker John Lunsford’s 39-yard attempt went wide left, leaving the Flames with nothing to show for a drive that ate up 4:02, and the first quarter ended with two zeros on the scoreboard.

On VMI’s second drive of the second quarter, Liberty defensive lineman Chima Uzowihe came up with a big sack against quarterback A.J. Augustine on third down, forcing the Keydets to punt.

“(The sack) felt great,” Uzowihe said. “It felt awesome. I can’t really describe it. It was just a lot of excitement.”As Liberty took over with 6:12 to go in the half, running back D.J. Abnar split out to the left for a 32-yard gain. Two plays later, Woodrum’s pass was deflected and intercepted, giving the ball back to VMI.

After gaining possession again on an interception by safety Jacob Hagen, a 20-yard run by Rice put the Flames in good position. The next three downs resulted in gains for nine total yards, leaving the Flames short of the first down. A Woodrum pass to tight end Brandon Apon on fourth down was incomplete, but the Flames were bailed out by an offsides call against VMI, resulting in a first down.

In one of Liberty’s best chances to score in the half, an incomplete pass too deep for wide receiver Darrin Peterson and two false starts plagued the Flames, forcing them to again go for a field goal. Lunsford’s 59-yard attempt sailed wide left, sending both the Flames and Keydets into halftime scoreless.

Woodrum completed four of 14 attempts for 50 yards in the first half.

“I went in (the locker room), and I told the offense, ‘I’ll take all the blame for that first half,’” Woodrum said. “I’ve never played that bad, and I was just kind of out of it really. I couldn’t seem to get out of the funk. Every time we’d have an easy throw, I’d overshoot it, and I kept missing my deep shots … (But) I think I played a lot better in the second half.”

After a halftime show that honored past and present military members, Liberty came out of the locker room with a pick by Liberty cornerback Walt Aikens on VMI’s first possession of the half.

As the Flames took over in VMI territory less than 45 seconds into the third quarter, a 28-yard catch by Henderson gave Liberty a first-and-goal from the one-yard line. Rice’s failed attempts to get into the end zone left the Flames at third-and-one when Woodrum rushed over the right tackle to score. Lunsford’s point after was good, allowing Liberty to gain a 7-0 lead.

On the last possession of the third quarter, Peterson came down with a 56-yard bomb from Woodrum to take Liberty down to the VMI 28-yard line. A few plays later, Apon made an acrobatic catch for six yards as he was going out of bounds along the right sideline. An incomplete pass to Henderson on third down ended the quarter, but Liberty maintained possession.

At the start of the final quarter, Lunsford converted a 27-yard field goal attempt on fourth down to cap off the 9-play, 75-yard drive and push the Liberty lead to 10-0.

On the ensuing VMI possession, Sigmon came up with an interception when the ball fell into his arms as he was lying on his back.

But Liberty’s chance to take advantage of the turnover was squashed by broken plays and another missed field goal by Lunsford, this time from 44 yards.

“(Lunsford) just hasn’t been following through and hasn’t been consistent,” Head Coach Turner Gill said. “Maybe … it’s kinda like the old baseball deal. He’s in a slump, and you gotta find a way to get out of it.”

With 6:57 left in the game, Liberty took over at its own 42-yard line. The Flames strung together several plays for two first downs before Woodrum ran 27 yards for a touchdown on third-and-one to put the Flames up 17-0.

In the last four minutes of the game, Augustine overcame two sacks and helped VMI to convert a fourth-and-eleven for its first score in the game. A 34-yard pass to the end zone was caught by wide receiver Samuel Patterson for the touchdown to make the final score 17-7 in favor of Liberty.

Despite Liberty’s offensive woes, particularly in the first half, the Flames earned a total of 377 yards. Woodrum finished the game 13-26 for 190 passing yards, and Rice and Abnar combined for 31 rushes and 159 yards. Peterson pulled down nine catches for 118 yards.

But it was Liberty’s defense that was the determining factor in the game. The defensive unit recorded four sacks for 43 yards and the Flames pressure forced three interceptions. Uzowihe recorded two of Liberty’s four sacks and Aikens recorded eight total tackles and an interception for the Flames.

“Our … defense played extremely well throughout the game,” Gill said. “Our offense, finally in the second half, made plays when they had to make (them). It shows character in our guys to be resilient.”

The Flames will host Presbyterian College for their next game Saturday, Nov. 9 at 3:30 p.m.