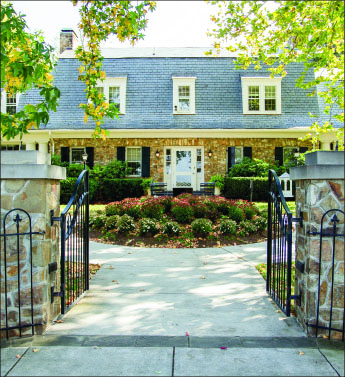 The buzz and hum of power drills drift through the halls of Liberty University’s Montview Mansion as the historic home nears the completion of its renovation overhaul. Since Sen. Carter Glass built the home in 1923, the same stone walls and wide windows have overlooked Lynchburg as the city has grown up around it. Until recently, the mansion, which currently serves as a bed and breakfast for Liberty guests and a museum about Glass and the late Dr. Jerry Falwell, appeared to be a time capsule of the perfect 1920s home.
“Some renovations were done (to accommodate) Dr. Falwell’s former office,” Paula Johnson, the curator of the Jerry Falwell Museum and caretaker of Montview Mansion, said. “Other than that, the rest has been kept exactly like it was in 1923.”

But now, as Liberty has exploded with opportunities and Lynchburg has swelled in size, the time has come for the mansion to grow. In late August, President Jerry Falwell, Jr. gave directions to Johnson and Mark Creasey, the special projects and events coordinator for the mansion, to transform the cottage home into a more modern, tranquil getaway for guests of Liberty.

The president hoped that the renovation would not only help bring the mansion up-to-date with the rest of Liberty’s building projects, but would also offer a convenient place to stay for guests with disabilities, according to Johnson.

With this goal in mind, Johnson and Creasey converted a downstairs sitting area into an extra bedroom, which now has a private screened-in porch with French doors, a queen-size bed with steps, a private bathroom and a dressing room and is called the Williamsburg Suite.

Johnson and Creasey’s designs for the mansion did not stop at just creating an extra room, however. The entire house underwent a major transformation.

The first thing to go was the well-worn dark carpeting. Previously, nearly every room had a different shade of carpet with a mixture of textures. Not only was the look of every room different, but also the upkeep for each carpet required specific cleaning instructions that made it difficult to maintain. Once that carpet was ripped out, it was replaced with a creamy beige carpet that covers the entire public side of the mansion, which Creasey said gives the home a more cohesive feel.

Additionally, the yellowing country-style wallpaper in the kitchen was replaced by a pale blue, taupe and white wallpaper. The design blends the contemporary with the traditional, suiting the mansion’s new theme of classic-meets-modern.

For the upstairs, Johnson and Creasey plan to give all the rest of the bedrooms a brighter, lighter feeling.

“We want to freshen the look of the bedrooms and give the house an update,” Johnson said. “(When the renovations are finished), we will have all white linens like a spa room. The linens match with the original 1923 bathrooms’ white tiles. We will have lots of extra pillows and down comforters.”

The outside of the home has seen changes as well. The mansion’s backyard already had flowers, a prayer garden, and a weeping cherry tree. New rose bushes have been added to the backyard during the home’s renovations.

According to Creasey, the mansion is expected to officially reopen between late October and early November. Johnson and Assistant Curator of the mansion Michelle Marttila will then resume giving tours to visitors and preparing the home for its overnight guests.

Creasey believes the renovations will allow guests to feel more comfortable during their stay, and it will reconnect the mansion with Liberty’s students and staff who have grown used to seeing the home in its original state.

“Anytime you do a project like this, it brings a new appreciation and light to something you’ve been seeing everyday,” Creasey said. “It breathes a new life into the mansion.”

Johnson said that recently, Montview Mansion has become much busier, and the added space will allow for even more guests to be able to enjoy a stay at the home.

“We enjoy the chance to give our guests the best of the best,” Johson said. “If you stay at a hotel, you get a nice room and maybe a restaurant, but we offer the comfort of a home.”

While the updates to the mansion have mostly been to the look of the house, Johnson and Marttila know that it is not just the physical attributes that attract guests to the mansion. The legacy of Dr. Falwell and the ability to provide a spiritual retreat for guests give the mansion a second-home feel. Johnson said the hope of the mansion staff is to take care of guests’ immediate needs while ministering to their spiritual needs.

“The goal of Montview Mansion is to provide a beautiful place to stay at the heart of the campus for guests of Liberty University,” Johnson said. “We want people to feel like they are staying in a historic and beautifully restored home. Most importantly, we want guests to feel the love of the Lord.”