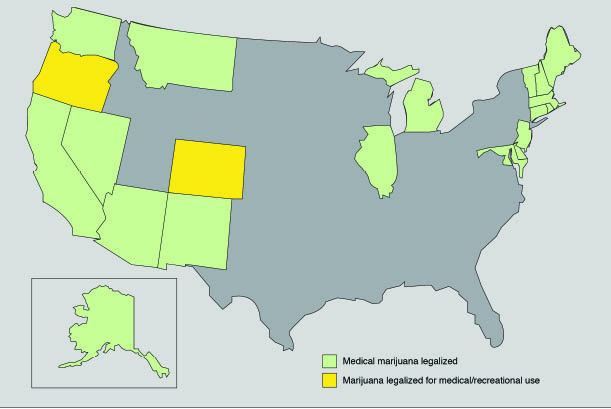 CANNABIS — Twenty-one states and the District of Columbia have now legalized the use of marijuana in some form. Photo credit: Abigail Bock

Legalization is a viable way to help boost the U.S. economy

Within the last year, our country has undergone some big changes. One of these changes is that two states, Colorado and Washington, have legalized marijuana for recreational use.

Its law in Colorado, which passed Nov. 6, 2012 under the 64th Amendment, states that an adult over the age of 21 may possess up to one ounce of marijuana. Adults may also grow up to six plants for private use.

Washington’s I-502, an initiative on marijuana reform passed by the Washington State Legislature, allows an individual over the age of 21 to possess up to an ounce of marijuana.
Many Conservatives may believe that this could hurt our country, that marijuana users will start smoking wherever they feel led.

That is not the case.

In both states, smoking marijuana in public is illegal, and driving while under the influence of marijuana comes with the same penalties as driving drunk.
Should we be concerned with the legalization of marijuana?

As a Conservative, I see no reason to be concerned. In fact, positive results could come from the legalization of marijuana.

According to the BBC, illegal drug use is on the rise worldwide, and expanded efforts at controlling the global illegal drug market are failing.

“We should look to implement policies that place community health and safety at the forefront of our efforts and consider drug use a public health issue rather than a criminal justice issue,” Dr. Evan Wood, chairman at The International Centre for Science in Drug Policy in Vancouver, Canada, said.

By allowing the legalization of marijuana, the funds used to fight marijuana can be used to focus on health care and substance abuse counseling for harder drug users. That means that officials who fight harder drugs — such as heroine, cocaine and, worst of all, meth — would be given more funding to get these drugs off the street and to get users help.
Practically speaking, these funds could be put into rehabilitation centers.

The second positive outcome is the taxation of marijuana producers and marijuana users. In Colorado and Washington, manufacturers and distributors have to be licensed by the state. Licensing would help the states’ economies through collected fees.

“Marijuana licensing fees are higher than any other industry in Colorado, up to $18,000 per marijuana store, more than enough to fund regulation,” Robert J. Corry, Jr. of The Denver Post said.

Also, for every purchase of marijuana, a sales tax is charged.

According to The Denver Post, a 15 percent excise tax is charged on every marijuana sale, along with a 10 percent sales tax. That equals 25 percent tax in total for the sale of marijuana, and for the state of Colorado, that will bring in a lot of revenue that the state can use.

The legalization of marijuana could help this country get rid of some of the debt we have accumulated.

The third and final reason why marijuana legalization is a good idea is because, whether or not marijuana is legal, people are going to smoke it.

With marijuana being illegal, users have to pour money into drug dealers. These drug dealers are importing their marijuana or growing it secretly.

No one can know what is in the marijuana they buy, and according to the Center for Substance Abuse Research, there have been cases where users have bought marijuana that were laced with chemicals.

Keeping marijuana illegal is redundant and reminds me of the prohibition of alcohol. People still drank, but instead of the revenue being taxed and going into the government, it went into the hands of people like Al Capone.

As other states debate whether the legalization of marijuana is worth it, remember that legalization could be some states’ ticket out of debt, will take money out of the hands of criminals and will be much safer.

Benefits from marijuana are temporary at best

At the time of New World exploration, Spanish and English colonists brought over and grew cannabis as a source of dietary fiber. Fast-forward five centuries, and America’s use of it is quite tainted.

Before the discovery of potential health benefits, many users said they smoked it as an escape to get away from life stresses and issues. The theory of “smoking your stress away” is a failure because the issue still remains when drug supplies run dry.

Cannabis, or in other words marijuana, has been a controversial drug and is now being approved by state constitutions. Colorado and Washington allow the use of marijuana for more than just medical reasons. According to medicalmarijuana.org, 20 states have allowed the use of medical marijuana.

Colorado and Washington have also placed restrictions on the drug, prohibiting public use by only allowing citizens to carry one ounce of the substance and, most importantly, placing an age limit of 21 or older to buy and use the drug.

While it may be debated, marijuana can be used as a stepping stone drug to harder and stronger drugs such as cocaine, heroin, meth and phencyclidine (PCP). Also, while doctors and physicians may say that marijuana can be helpful in treating diseases such as cancer and HIV, it is not fully proven. According to the Food and Drug Administration (FDA), there has not been enough test trials with marijuana to prove its health benefits outweigh its defects.

There are three phases that a drug must go through in order to be approved by the FDA. In those phases, they test the safety, side effects and efficiency of the potential drug. In 2012, The National Institute of Drug Abuse said, “To be considered a legitimate medicine, a substance must have well-defined and measurable ingredients that are consistent from one unit to the next.”

A marijuana plant may contain more than 400 chemical compounds differing from each plant.

Still, while the debate of whether marijuana should be legalized is up in the air, I believe that it should not. The health benefits from the drug are temporary, and the downsides, such as addiction from its use, could eventually harm an individual.

Rather than from a health point of view, Colorado and Washington have found a “positive” way for the use of the product.

Melissa Cammack of Global Communications News Network wrote in an article that Washington and Colorado consider that legal marijuana will help the local economies fund the states due to the high tax placed on the product. Although this may seem glamorous, Americans must realize there are other ways to strengthen our economy, such as resetting mortgage rates, according to barrons.com.

Marijuana is a tough drug to let go of, and in some cases, it can be as addictive as alcohol and cigarettes. We can see the long-term effects those do to the body when abused. According to addictionandrecovery.org, marijuana users are four times more likely to develop signs of depression and triple the chances of forming psychotic symptoms. Moreover, the drug is about as strong as a 60-120 mg of codeine when treating pain for a cancer patient.

Instead of trying to force Americans to inhale the “benefits” marijuana may produce for the U.S. market, state governments and Congress need to rethink a more profitable, non-destructive perk for the economy.