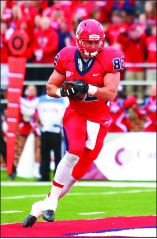 After failing on third down, it came down to the leg of kicker John Lunsford and the special teams unit to extend the game to a third overtime. However, Coastal Carolina wide receiver LaDarius Hawthorne was able to block the kick, solidifying a Chanticleer victory.

While the Chanticleer fans in attendance rushed the field, the Flames players and fans were stunned, left with a numb feeling of losing another close game, this time to a bitter rival.

“It’s pretty demoralizing,” running back Desmond Rice said. “As a team, we fought hard for four-plus quarters. We really wanted this ball game, and to lose like that, it’s pretty tough.”

This season, Liberty has lost four games by a combined 21 points.

“We need to play better as a team,” quarterback Josh Woodrum said. “It’s weird. Whenever our defense balls out, the offense doesn’t play well. At Old Dominion University (ODU), our defense played great, but we only scored 17 points on offense. We need to figure out how to mesh as a team.”

At the start of the first overtime, Rice gashed the Chanticleer defense for a 25-yard touchdown, giving the Flames 52-45 lead. To seal the win, the defense needed a stop.
“Coming from the ODU game two weeks ago, it’s all about finishing,” linebacker Nick Sigmon said. “That’s the only thing we were preaching.

At the end of the day, they made more plays than we did. I’m proud of our guys. We fought hard the whole game.”

But that task was daunting. Coastal Carolina used its bruising, 6-foot-2-inch, 230-pound running back Lorenzo Taliaferro exclusively on the next possession. Taliaferro, who was fifth in the nation in rushing yards and third in touchdowns, punched the ball into the end zone from seven yards out.

“They ran downhill, (and) they ran behind their linemen,” Sigmon said. “They ran it the whole game … fatigue didn’t play a factor.”

Liberty came out firing on all cylinders, scoring touchdowns on four of its five possessions in the first half. Woodrum was 17-24 for 218 yards and three touchdowns during the half. Woodrum connected with wide receiver Gabe Henderson six times for 109 yards and a touchdown. The Flames were also able to convert on third down (5-6 on third down conversions), and Liberty went into halftime up 28-16.

The Flames held two 19-point leads in the third quarter, but were not able to put the game away. Liberty started with the ball in the second half. In its first possession of the first half, Liberty was able to put together a long drive. Running back Clifton Richardson capped off the 11-play, 77-yard drive with a two-yard touchdown run and gave the Flames a 35-16 lead.

“Our offense did a good job,” Woodrum said. “We had a great game plan this week. We were hitting our spots with plays this week.” With a sense of urgency, the Chanticleers knew they needed to score in order to stay in the game. After quarterback Alex Ross scrambled short of a first down, punter Alex Cain faked a punt and passed it to punt protector Andre Johnson, who ran for 25 yards with 7:55 to go in the quarter.

“We warned them on the sidelines,” Head Coach Turner Gill said. “We had people there, but they were not fast enough to make the tackle. We always have someone to watch that guy, being in man (coverage), but they made a play.”

Later in the drive, Coastal Carolina was able to convert on another fourth down when Ross connected with wide receiver Matt Hazel on a 6-yard slant route. Two plays later, Taliaferro was able to score his 15th touchdown of the season, which was good for a Chanticleer single-season record. The score also reduced the lead to 12.

Late in the third quarter, the Flames offense answered, highlighted by two plays in the air. On third down with 3:59 left, wide receiver Darrin Peterson caught a ball over Chanticleers cornerback Samson Baldwin for 27 yards. On the next play, Woodrum hit wide receiver Jaquan Glover on a 36-yard flea flicker. A few plays later, Rice extended the lead after scoring from 10 yards out, giving the Flames a 42-23 lead.

“In a big game like this, I wanna fight hard for my teammates,” Rice said. “In a situation like that, I wanna do everything I can.”

But before time expired in the third quarter, the Chanticleers responded when Ross hit Hazel for a 12-yard pass, reducing the lead to 12 again.

At the beginning of the fourth quarter, Coastal Carolina gained possession after a Liberty punt and began to march down the field. With 9:44 left in regulation, Ross was able to find wide receiver DeMario Bennett up the middle for a 30-yard gain. On the next play, Ross scrambled for six yards. Two plays later, Ross tossed it to Taliaferro for a nine-yard touchdown to put the Chanticleers within five.

With victory in sight, the Flames wanted to milk the clock and move the ball effectively. After earning a first down, Woodrum went deep and connected with Peterson for a 45-yard gain with 6:37 left in regulation. Liberty stalled in the red zone and kicked a 22-yard field goal.

“We fought hard the entire game,” Rice said. “In the fourth quarter, we didn’t score as many points as we like to, but we just gotta keep fighting hard.” Coastal Carolina gained possession with four minutes left in the game. With 2:07 to go, the Chanticleers found themselves in another fourth-down situation. Composed in the pocket, Ross delivered a pass to wide receiver Niccolo Mastromatteo on an 8-yard out route and a first down. On the next play, Taliaferro received a pitch and ran 20 yards before running out of bounds. Ross then threw to his tight end Thomas Pauciello for 14 yards. Three plays later, Pauciello and Ross hooked up again, this time for a 15-yard touchdown with 45 seconds left in regulation.

Down 45-43, the Chanticleers were forced to go for the two-point conversion. With plenty of options, such as Hazel, who had nine catches for 147 yards and a couple of touchdowns at that point, or the 6-foot-6-inch Pauciello, Coastal Carolina chose to place redshirt freshman Bruce Mapp in a one-on-one situation against cornerback Kenny Scott. Mapp made a stutter step to the outside, which froze Scott, and finished with a move to the inside to gain enough space to catch the pass from Ross. The two-point conversion tied the game, 45-45.

“We have to continue to keep our focus,” Gill said. “We have to keep on working on executing better in the fourth quarter. I would not say that our team loses focus. They are out there trying and playing hard, but we have to work on executing.”

Offensively, the Flames had a slew of starters that had career days. Woodrum threw for a career-high 382 yards, three touchdowns and one interception. Rice carried the ball 21 times for a career-high 171 yards and three touchdowns. Peterson and Henderson caught nine passes apiece to combine for 246 yards and a touchdown.
The Chanticleers snapped the Flames streaks of five straight homecoming wins and seven straight home wins.

The Chanticleers now hold a 6-5 series lead against the Flames. This was their first victory at Williams Stadium since 2005, when they came away with 27-21 victory in triple overtime.