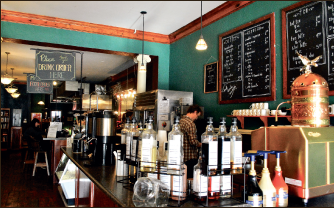 According to Patterson, he was a first-time business owner who purchased The White Hart Café two years ago, along with two business partners.

“I got into the business not so much ‘cause I’m very savvy business-wise,” Patterson said. “I liked the space that the previous owner had created. I loved the intersection of people downtown. It was a great place I had grown to love, and didn’t want to see the previous owner close it.”

Patterson described The White Hart Café as an extension of his living room, saying that he enjoyed the people he met and the conversations he had with them.

“We had worked pretty hard to provide a good experience here as well as some good food and coffee. We used a little bit more expensive ingredients because we wanted the food to be good and to get local stuff as much as we could,” Patterson said.

At times, it would be hard to find a seat at The White Hart Café since numerous students used the quaint coffee shop as an outlet to get away from campus and focus on their studies while enjoying good food and hot beverages. “I went there pretty often, usually when I needed to get bigger assignments done and when I wanted to get off campus for awhile,” Liberty senior Justin Smith said. “I would always get a brewed coffee, whatever they had for that day.”

Patterson explained that the closing was a matter of simply not making as much money as he was putting into it.

“Income was less than expenses, and it had been that way for about a year or so, and it was kind of to a point where I couldn’t carry on anymore. I didn’t want to lose any more money,” Patterson said.

According to Patterson, he had some debt when he originally bought the business, which made operation somewhat difficult at times.

“When you do a business like this, you need to have some reserves and that kind of thing, and I was working too close to the budget,” Patterson said.

According to Patterson, some individuals are looking to purchase the business, so there is a possibility that The White Hart Café will re-open under a different owner.