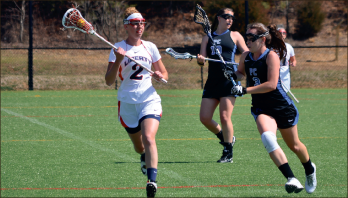 Coach Denham: 16-10 victory over Presbyterian is an ‘overall great win for team on senior day’ Savor every moment — Morgan Becker (2) had one goal and an assist against the Blue Hose Friday, April 5. Photo credit: Kamryn Reynolds

In front of family and friends, the Lady Flames put on an impressive offensive display against the Blue Hose, with seniors Chloe McIntosh, Candice Parsons, Amber Nichols and Jen Freymond all making an impact on the field.

“This is my first class where we have two seniors that have been here for four years, and the other two seniors are obviously very special to the program too,” Lady Flames Head Coach Regan Denham said. “They all played awesome today, and it was just an overall great win for the team on senior day.”

Junior Nina Dunay, who led the Lady Flames with five goals against Presbyterian, said that she was very thankful for her senior teammates and everything that they have accomplished to help bring the program to where
it is today.

“The seniors definitely paved the way,” Dunay said. “If it weren’t for them, there would be no program at all, so we have big shoes to fill. I really appreciate them building tradition and paving the way here. Just the fact that we can sharpen each other on and off the field is a really unique aspect here at Liberty, and I look forward to continuing that on in the next few years.”

The Lady Flames drew first blood when Dunay scored the first of her five goals just 1:13 into the game. “I think (the goal) really just set the tone and let the rest of the team know that we can do this and we can hang with this team, if not just come out on top,” Dunay said. “It just spiced everyone up and gave them confidence.”

Despite the early momentum of the Lady Flames, the Blue Hose responded with two goals of their own to cut the deficit to one with 18:11 remaining in the first half.

A goal by junior Jen Moyer less than three minutes later gave the Lady Flames a 4-2 lead, the start of an 8-0 run that the Blue Hose could not recover from.

“In lacrosse, there is always back and forth momentum,” Denham said. “That’s what we really focused on today — riding the positive momentum we were able to generate.”

Presbyterian stopped the run by putting the ball in the back of the net with 1:40 remaining to close the scoring for the first half with the Lady Flames leading 11-3.

In the second half, Liberty increased their lead to double digits after goals by Dunay and Britton. However, the Blue Hose scored four unanswered goals to narrow the gap to 13-6.

The Lady Flames did not budge, trading goals with the Blue Hose until Dunay sealed the game with a fifth and final goal that gave the Lady Flames a 16-9 advantage with 2:32 remaining in the second half.

The Lady Flames will be in action again Friday, April 12 when they travel to take on the Coastal Carolina Chanticleers.