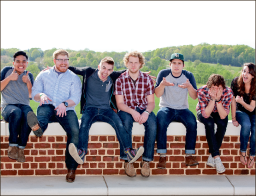 The project, entitled “Enosis,” which is the Greek for “union,” is a collaboration of talent amongst Liberty University songwriters, according to the group’s Facebook page.

“With Enosis, we can provide an opportunity for students to collaborate on a personal level with music production,” Riordan said. “We are looking to create a worship album that has relationship in mind, not just excellent musicianship.”

According to Riordan, a meeting with about 60 songwriters they know was held at the prayer chapel. Prayer and worship took place, asking God to give them the creativity and momentum to create the album. From this meeting, a promotional video was created as well as a Facebook page to reach out to even more students.

“We must ask ourselves, ‘Does our school of 13,000 followers of Christ contain the potential to produce 12 songs that could impact the world?’ I believe the answer to that is yes,” Riordan said. “We have over 100 writers at this school. If each writer has written an average of 10 songs each, we will have 1,000 songs to choose from.”

Riordan has a recording studio in Lynchburg that does the recording for many artists on campus, such as 71 and Exodus, and sees a lot of talent that comes through, both in songwriting and singing. From this, he wanted to take advantage of all the talent that Liberty has to offer.

“Enosis is just one of the many great results of a vision that Jerry Falwell birthed back in 1971,” Riordan said. “We want to see God glorified through the excellent songwriting skills of the student body and see it impact the world for Christ.”

The album will include 12 tracks that were written and performed by Liberty students, and Riordan hopes to make a new album every year. The goal is to bring in different artists to collaborate on a common artistic theme.

“We want to carry the name of Jesus in a fresh way and promote a lifestyle that worships Jesus through these lyrics,” Riordan said.

Riordan will be engineering and producing the album, and Trey Roth will mix and master it, according to Riordan. Roth has worked with Christian artists such as Third Day, Casting Crowns and Kristian Stanfill.

“This all starts with a big vision,” Riordan said. “The vision must be accompanied with a fierce passion that drives us to take action. Action accompanied by excellence births movements — powerful movements. A powerful movement founded on and strengthened by the gospel brings forth life change.”

Riordan said students have until April 30 to submit their songs, and the final album will be released in the upcoming months.