Does electing a new pope give us hope? 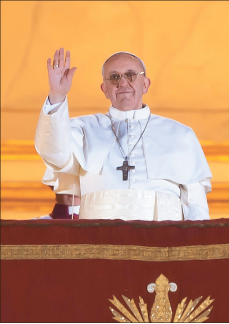 The world was shocked Feb. 11, 2013 when Pope Benedict XVI publicly announced his official resignation as head of the Roman Catholic Church.

According to the Catholic Education Resource Center, Pope Benedict XVI was the first pope to retire in nearly 600 years, and the first to do so on his own volition since 1294.

The unexpected nature of the papal proclamation rapidly gained attention for Catholicism, placing newly-elected Pope Francis at the pinnacle of global news headlines. Transition — Though viewed mostly as a figurehead by many, popes still have the power to change. Catholic Church, Creative Commons

According to International Business Times, more than one million people traveled to Rome for the inauguration of Jorge Mario Bergoglio, former cardinal and archbishop of Buenos Aires. Among those in the crowd at St. Peter’s Basilica were religious leaders, royalty and heads of state representing more than 130 countries.

The significance of a new pope, however, has far more implications than merely a day of spectacle and re-energized spirituality in Rome. It is for no small reason that Protestants ought to heed the words and deeds of the new leader of the Catholic faith.

Though the position of the pope may seem nothing more than a traditional formality, the pope is recognized as the official voice of the Roman Catholic Church. His comments and calls to action reflect the voice of all Roman Catholic leaders and followers for matters both inside and outside the church.

According to Ken Cleaver, chair of the Department of Biblical and Theological Studies at Liberty University, insofar as the pope’s choices affect the direction of Roman Catholics around the world, his position matters considerably.

“To the extent that 1.2 billion people’s beliefs and lives are impacted by the choices and teaching of the pope, yes, his position ought to be of great concern,” Cleaver said.

Though Protestants may not look to the pope as head of the church and sole vicar of Christ, we are called as ambassadors of Christ to make disciples of all people and nations. Protestants should be neither passive nor condemning. Though Catholicism and Protestantism may be two different religious sects, Protestants should avoid the extreme of altogether dismissing those of Catholic faith.

Rather than observing with indifference, Protestants need to be actively and intelligently engaging the world as people culturally aware. As we witnessed history in the making, the installation of Pope Francis provided the opportunity to further discover and discuss the essentials of Christianity and how they fare with papal claims.

When it comes to governing leaders, the Bible speaks clearly on where we ought to begin — in prayer. We are charged in 1 Timothy 2:1-2 to pray for all those in authority. Prayer for the pope, then, is a responsibility that every Protestant bears, despite inconvenience or difference of opinion.

As the most powerful spiritual leader in the world, Pope Francis will set the tone on issues of life and death. He will frame the church’s role in the moral debates concerning abortion, divorce, homosexuality, euthanasia, education and much more.

Yet, regardless of future papal decisions and actions, God is the ultimate sovereign, and Christians can rest assured knowing that our prayers affect decisions at the highest level. So, let us pray fervently for the future of the Roman Catholic Church and for the salvation of all whose eyes are currently fixed on the Vatican.