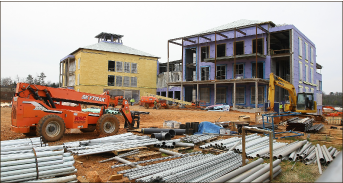 With the final steel beam now installed in the Jerry Falwell Library, the structure is beginning to resemble a finished product as building crews continue in the construction process. “So far, we’ve been very much on schedule,” Associate Dean of the Integrated Learning Resource Center (ILRC) Lowell Walters said.

As of Feb. 14, crews had at least two stairwells left to pour for the building and were starting to work on some of the interior walls, according to Walters.

When construction nears completion, the ILRC will begin the delicate process of preparing the transition from the old library to the new.

The automated storage and retrieval system (ASRS), better known as the robotics system, will contain more than 400,000 items. The resources (mostly books) that will not go into the system will be split between two locations — both the traditional, two-story reading room and the four-story book tower, Walters said.

“We can do a lot of different things that we really didn’t have the space to do in the old library,” Dean of the ILRC Marcy Pride said.

According to Walters, with the new robotic system, the ILRC is aiming for a five-minute turn around in regards to getting the item from storage to the customer.

Students were previously limited to the first floor library of DeMoss when it came to reading books — unless, of course, the book was checked out, Walters said. With the new retrieval system, students will no longer be so limited.

“The books will be able to flow through most of the building, and the building is very large,” Walters said.

This system will allow for students to take full advantage of the library’s massive space to meet their needs, according to Walters.

“In the new library, we’re going to be creating an environment that can meet the diverse needs of students in a better fashion than what we were able to do here (in the old library),” Pride said.

Although construction crews broke ground in March 2012, Walters said that the planning process for Liberty’s largest funded building started over two and a half years ago, when initial issues with the old library were discussed.

According to Walters, Tyler Veak, who was the scholarly communication librarian, was one of the first to suggest the idea of building a brand-new library when the discussion of making improvements to the old library initially began.

According to the Liberty News Service, $50 million has been invested in the new project, which boasts an impressive 170,000 square-foot structure.

Walters said that the new library will seat more than 2,300 students, about 10 percent of the university’s future projected goal of 20,000 residential students.

“We believe this facility will become the bridge between Liberty’s original vision for academic excellence and the final fulfillment of that vision,” Chancellor Jerry Falwell, Jr. said.

The grand opening of the Jerry Falwell Library is projected for late fall 2013.