Guns are not the problem, we are 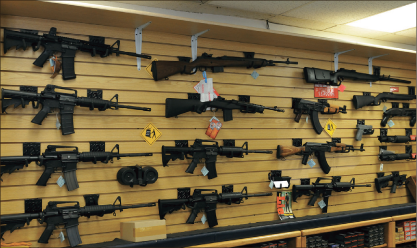 In a nation of waning ethics and lack of morals, stricter laws will not eliminate unjust deaths

Where were you when the shootings at Sandy Hook Elementary school in Newtown, Conn. happened? I imagine most people reading this were doing something close to what I was doing, savoring the first few days of a month of freedom from school. I was at Myrtle Beach, enjoying the beginning of my Christmas break, when I heard of the tragedy. Control — The people behind the weapons, not the weapons themselves, should be scrutinized. Mike Sarchang, Creative Commons

You knew soon after the misfortune, when President Barack Obama stated that “these tragedies must end, and to end them we must change,” that action would follow.

Wednesday, Jan. 16, it came. Obama presented guidelines for 23 executive actions to crack down on background checks, licensing and mental health requirements for future firearm purchasers. The new laws will change the way the average person and the hunter go about buying guns.

I am as avid of a gun supporter as they come. I have hunted with my father since I was 5 and had the rules of gun safety pounded in my head from the onset. I can still hear my father’s voice every time I pick up a gun, saying, “Don’t ever point it at anything except the ground or the animal you plan on shooting.” Even if I am hunting alone, I still hear him saying, “Is your finger on the trigger or the safety?”

I do not agree with all, if not most, of the changes, but there are some understandable ones. Even I will say that some of these actions, such as the elimination of the loophole that allows people to purchase guns at gun shows sold by unlicensed dealers, and in almost all states without any proof of identification or background checks, are a good move.

Gun control, as a whole, is not the answer — but neither are more guns.

Want to know why? Guns did not create this issue, and they certainly are not the focal point of this problem in America.

The problem is that we are numb to violence. Our culture bathes us in it, and as a result, the value we place on human life slowly trickles away.

Recently, the Parent Television Council found that there are 4.41 instances of violence per hour of prime time television. In a 2008 study, appropriately named “Comfortably Numb,” researchers from the University of Michigan and Iowa State University found that college age students who watched violent movies or played violent video games were less likely to take real life violence around them seriously.

Do not get me wrong, I am not the person who thinks that video games or movies make you a murderer or that these activities should serve as a scapegoat. However, when we expose ourselves to violence, perhaps even with the innocent intention of watching the local news, it begins to numb our senses.

It does not take a genius to see that our morals, in general, are fading fast as well. Last year, Pew Research found that those who identified themselves as “Christian” had fallen five percentage points in only five years, while those professing “no faith” had consequently risen five percent.

The trend of births to unmarried couples is also on the rise, with the National Center for Health Statistics stating that 40 percent of newborns are to unwed mothers. Many times, these children grow up without a strong family support system or a father figure, a consistent characteristic of the ever-growing list of shooters in these mass murder cases.

Are we not angry enough to make a difference?

Sure, when we heard the news, we were hurt. Most of us were even mad enough to dedicate a few of our status updates on Facebook to the crisis. But let us be real, most of us did not call or email our local government officials asking how we could help. Most of us did not donate money to the school or families involved. If I could check, I am curious to know if many of us even stopped our busy schedules to take time to pray the moment we heard the news.

Instead, we politicize these problems. We draw partisan lines that are too thick for us to see past. We create issues that perhaps do not even exist.

Rather than point fingers, perhaps we could take a lesson from God. In Galatians 6, we are commanded to “reach out to those who are oppressed.” Paul tells us to “help the weak” in Acts 20. How many times are we commanded to love our brother?

The people who commit these types of heinous crimes are too often the people we leave sitting in the corner alone to fester. I find it hard to believe that if the Christians around these shooters had treated them like brothers, that they would not have at least seen warning signs to prevent these crimes.

I am not saying that if we do our moral duty as Christians — or merely human beings for that matter — that the shootings at Sandy Hook or Aurora would not have happened, but the odds would be much lower.

We cannot keep closing our eyes to those around us who need it most. We cannot become numb to the violence that seems to surround us. Our country and fellow countrymen deserve better. Those children and teachers deserved better.

We can do better — but do not trick yourself into thinking that laws will make that happen.