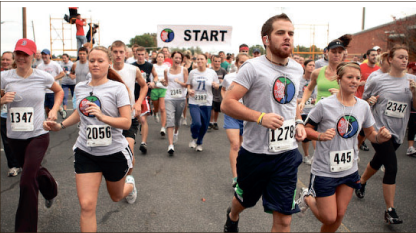 With Freedom 4/24’s Run For Their Lives race just around the corner, many residents of Lynchburg are turning their attention to the international atrocity that is human trafficking. Despite the rise of awareness about this topic in America — largely thanks to organizations like Freedom 4/24 — it seems that our own government has yet to attend to the problem. Run for a cause — Run For Their Lives is just one example of Americans’ growing passion for the international atrocity that is sexual exploitation and human trafficking. Runfortheirlives.net

According to www.humantrafficking.org, the practice of human trafficking is the illegal trade of human beings for the purposes of slavery, commercial sexual exploitation or forced labor. Basically, a modern-day form of slavery.

This alarming and disgusting practice is occurring both domestically and internationally. Shockingly, most Americans are completely unaware of the commercial practice’s existence.

The New York Times recently reported that the Trafficking Victims Protection Act, a law against such practices, expired at the end of 2011. Even more alarming is the fact that Congress has yet to reinstate the act and continue enforcing it.

“Trafficking networks operate both domestically and transnationally, and although abuses disproportionally affect women and girls, the victims of this ongoing global tragedy are men, women and children of all ages,” Obama said. “And we recommit to bring an end to this inexcusable human rights abuse.”

That’s a great start by our Commander in Chief. I admire the president’s perspective on this topic. It is encouraging to know that he doesn’t ignore dilemmas like this that threaten the innocence and security of women and children.

But the victims of this barbaric practice could use a gavel with a little more gravity.

Unfortunately, despite the U.S. government’s strong commitment to combat this sadistic practice, www.humantrafficking.org reports that an estimated 14,500-17,500 people — primarily women and children — are trafficked to the U.S. annually.

According to the New York Times, President Obama’s response to these statistics remains encouraging in a press release he made in December 2011.

“My administration continues to implement our comprehensive strategy to combat human trafficking in America,” Obama said. “The steadfast defense of human rights is an essential part of our national identity, and as long as individuals suffer the violence of slavery and human trafficking, we must continue the fight.”

According to www.humantrafficking.org, the U.S. government has bolstered its game plan to combat this hideous business on national soil by providing millions of dollars in grants to organizations all over the world to implement programs in order to fight trafficking. These programs include disseminating information on the dangers of trafficking, strengthening the capacity of non-governmental organizations to protect those groups from abuse and violence, and outreach and economic opportunity programs for those at risk of being trafficked.

The hearts and intentions of political icons such as President Obama are encouraging. However, the news and statistics shared by credible human trafficking websites makes me wonder if the battle for human rights will ever be completely rectified. Sadly, political prowess, controversy of budget cuts and innovative approaches appear to spearhead the top priority of most politicians.

According to the New York Times, a reauthorization bill has also been offered in the House, although it’s not without unnecessary modifications. It would, for example, shift financing for victims’ services to the Justice Department from the Department of Health and Human Services, which is already the focus of much heated debate with the changes to ObamaCare.

Meanwhile, the battle for the sanctity of human life continues to wage domestically and internationally. Congress needs to expedite the process of reauthorizing the crucial act that thousands of children and victims of human trafficking so desperately need.