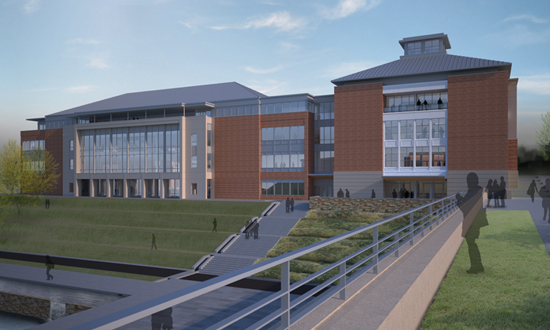 Falwell said he thought VMDO Architects of Charlottesville, Va. combined Jeffersonian style with modern materials in a way that America’s third president would do himself if he were alive today.

Liberty’s cofounder and Dean of the School of Religion and Liberty Baptist Theological Seminary Dr. Elmer Towns said architect Joe Atkins told him that Liberty’s groundbreaking was the best of many such events Atkins has attended. Towns enjoyed watching the chancellor climb into an excavator and start to demolish the Schilling Center personally.

“I looked over there and saw Chancellor Jerry Jr. breaking up the building, and I thought, ‘That’s not symbolic, he wants to do the whole thing,’” Towns said. “As a matter of fact, that’s what Jerry Sr. would do if he were up there — he would do the same thing. So it’s wonderful to see the son carrying on the work and legacy of the father.”

Vice Chancellor Dr. Ron Godwin said the Library was more than a testament to Dr. Jerry Falwell Sr. himself — the building honored his faith and promises, too.

“I had the unique perspective as his son to see the behind-the-scenes of Dad’s hard work and his diligence and his progress and heartache in a lot of the days of building this university,” Jonathan Falwell said. “Seeing him trust God every step of the way to do something and never wanting credit for it … he taught that to me and nailed it into my head many, many years ago.”

Jonathan Falwell said he thought the library was a fitting tribute to his father’s work and that it would be a visible testament for future generations.

“They’ll be able to see what it is that he did and what he went through in simply following after God,” Jonathan Falwell said. “For every generation to see what God can do with one person who just decides, ‘I’m gonna trust God, and I’m gonna do what God called me to do, regardless of what anybody says.’ I think it’s a pretty cool testimony.”

The Jerry Falwell Library will be more than just a book repository. The freestanding structure will also house a museum to its founder and rare artifacts including a $125,000 Dead Sea Scroll facsimile currently kept at the Vatican.

“It’s very fitting — he was a man of faith, and I got to see it during all the hard times and struggles with financial issues,” Becki Falwell said. “He always had a smile on his face and was always whistling. He had so much faith and courage … he knew God would take care of whatever problems came along.”

Naming the library after the university’s founder is an apt reflection of his goals for Liberty, Becki Falwell said.

As a Liberty alumnus and campus pastor, Vice President of Executive Projects Rev. Johnnie Moore Jr. agreed, saying that the new facility marks a turning point in the development and maturity of Liberty University.

“I think this is Liberty’s coming of age academically, and I can’t imagine a more fitting way of doing that than marrying the greatest academic achievement of the university — in terms of infrastructure to date — with the name of our founder,” Moore said.

Moore said that his life — and the lives of everyone who knew Jerry Falwell Sr. — was changed by Liberty’s late founder, his vision and his faith.

“I can’t think of a more fitting tribute than to take the nerve center of a university, which is its library, and make sure that future generations remember that it was Jerry Falwell’s vision that made this a reality,” Moore said.

Chancellor Jerry Falwell Jr. said the replacement of the university’s “temporary” buildings with permanent, iconic structures is part of the culmination of his father’s vision.

“I was here all those years when this was just a farm and finally a college campus — first with temporary buildings — so this was just exciting to see his vision come full circle,” he said. “His vision was to have temporary buildings for a short time, and we used them for 34 years. So it’s just exciting to see those buildings finally come down and to see the structures he envisioned finally go up. It’s an exciting day to be at Liberty.”