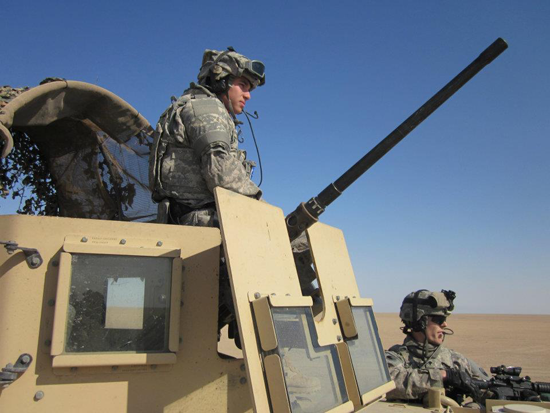 New Dawn — Spc. Bruno Mizerani deployed to Iraq with the 1-116th Infantry as part of Operation New Dawn. The deployment lasted from August to the end of the war in December 2011. Photo provided The mission was Mizerani’s first overseas deployment since joining the National Guard two years ago. He began training for Operation New Dawn — America’s official withdrawal from Iraq — back in May, and the unit shipped out at the beginning of August.

“It was a total culture shock when I went there because everyone dressed differently in the towns we passed and the places we went to,” Mizerani said. “I enjoyed the heat — even though it was 120 Fahrenheit — at least it was dry heat.”

According to a news release by the Virginia Department of Military Affairs, the soldiers of the 1-116th were fully aware of the scheduled troop withdrawal at the end of 2011, but they knew plans could change depending on conditions in Iraq. Local townspeople also anticipated the troops’ exit, but not always with good intentions, Mizerani said. Some of the Iraqis tried to predict the days he and the 1-116th would pull out to plan one last attack.

“Being one of the last ones to leave was actually pretty interesting,” he said. “The neighboring city southeast of us was trying to find out the days we’d be leaving so they could do a final strike. There were a couple of times they got it wrong, and once they even had it in their local newspaper the dates they thought we’d be leaving.”

Originally from the little town of Baixa Quente in the state of Minas Gerais, Brazil — about 12 hours east of the capital — Mizerani immigrated to the U.S. with his family when he was 12. Following in his father’s footsteps, Mizerani decided to enlist in the Army National Guard when he enrolled at Liberty.

“My dad was in the Army before, but then he went back in as a chaplain — through that I saw what the Army was like,” he said. “Later I wanted to join to serve my country and also because the Army would help me pay for school.”

With the Army’s help, Mizerani enrolled as an aviation student. He expects to graduate from Liberty in 2014 and hopes to go on to fly commercial aircraft.