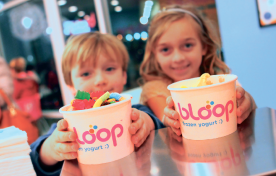 This franchise, started nine months ago, is the creation of four Liberty University graduates. After realizing that there was a large market for frozen yogurt, Daryl and Johanna Calfee, along with Todd Allen and Josh Oppenheimer, decided to start a franchise that would make better yogurt and provide friendlier customer service.

Bloop is a corporately owned franchise based in Lynchburg, Va. with new locations opening soon in Charlottesville, Va. and Greensboro, N.C. Franchisees are even interested in expanding Bloop Frozen Yogurt from West Virginia down to Florida. The immediate goal is to launch 10 stores in 2012.

“Our goal is that each Bloop store will donate enough … to buy one well that will provide water for…people in places around the world where curable diseases can be prevented by simply having clean, safe water to drink,” the website said.